The Stories Are Starting to Filter Out 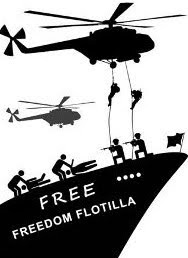 I have not been particularly impressed my Canadian media coverage of the Israeli attack on the aid flotilla on its way to Gaza.

Called the Freedom Flotilla the effort was organized by a coalition of human rights and humanitarian organizations to try to non-violently break through Israel's illegal blockade of Gaza. The intent was to deliver much needed humanitarian and developmental aid to the Palestinians in Gaza.

The Christian/Zionist crowd, as I expected, have been supporting this act of piracy and have been given the ink they need to try and justify Israel's actions. Stephen Harper, out of step with most international leaders, just before the G20, is backing an Israeli investigation of the events surrounding this travesty.

Although it is usually described as a Turkish flotilla there were participants from several nations.

Henning Mankell, the Swedish author of several popular crime novels was aboard the Sofia, one of six ships in the flotilla. He said the ship was carrying cement, building materials and prefabricated houses to Gaza. Mankell said, "I can promise you that there was not a single weapon aboard those ships.

About 25 passengers were on board, many of them Swedish. They were all captured, Mankell says they were "kidnapped", and all were imprisoned in Israel before being released. “This happened on international waters, so this was an act of piracy,” Mankell told journalists in Berlin.

He is calling for an international boycott of Israel.

Iara Lee, a Brazilian filmmaker who was on the ship Mavi Marmara, said the Israeli soldiers stormed the ship after cutting all communications. They then "started shooting at people". Speaking to a Brazilian TV network Lee said, "It was a surprise, because it happened in the middle of the night, in the darkness, in international waters, because we knew there would be a confrontation but not in international waters. Their first tactic was to cut all of our satellite communications and then they attacked. All I witnessed first hand was the shooting. They came on board and started shooting at people."

She said the commandos then sent all the women to a lower level of the ship.

"They said we were terrorists – it was absurd. They came into the part where the women were, lots and lots of them, dressed in black and with gigantic weapons as if they were in a war. They confiscated all of our telephones and all of our luggage and took everything out of the bags and put it on the floor."

"We expected them to shoot people in the legs, to shoot in the air, just to scare people, but they were direct," she said, in a São Paulo newspaper interview. "Some of them shot in the passengers' heads. Many people were murdered – it was unimaginable."

Australian Fairfax Media Limited, one of Australia's largest diversified media companies had two journalists on board the flotilla.

Fairfax journalist Paul McGeough, and photographer Kate Geraghty said they were "fine" as they landed after being deported from Israel.

Another Australian, Ahmed Luqman, did not leave Israel with the five planes as he was in hospital recovering from a gunshot wound to his leg sustained during the raid by Israeli commandos in which nine activists died.

What I wonder is where are the interviews with the Canadians who were participating in this humanitarian endeavour. Why haven't we heard firsthand accounts from them?
Posted by .Gord Hunter at 11:45