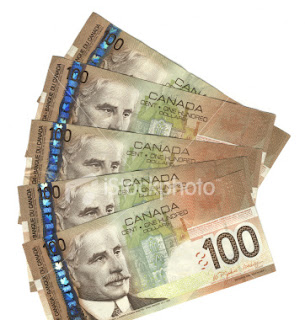 Anyone who has been reading the papers or watching the news these days knows that there is a major G-20 initiative to put in place, a global form of bank tax. The theory is that with this kind tax, a fund would be created to put into place, a kind of insurance plan so that taxpayers would no longer be on the hook for bank bailouts when the going gets tough economically.


Sound like a good idea to you? Yeah, me too but, the Harper/Flaherty crowd don’t think so and they have dispatched at least 5 high profile cabinet ministers internationally to try to derail the plan. Canadian banks don’t like the tax and of course the Conservative goal is to cut corporate taxes not to increase them. Flaherty would argue that we shouldn’t punish Canadian banks because they, unlike their many of their international friends, are sound, safe, reliable and free from the reckless practices that got the world into the economic mess we are in.

I think it should be noted here that if Canadian banks are all that, it has nothing to do with Tory corporate and economic policies. It isn’t that Canadian bankers live by a higher moral standard or that they wouldn’t get into those risky lending practices either. The Canadian banks are stronger because of the strict financial regulatory framework put into place by successive Liberal Governments.

The Harper government that generally hates this kind of regulation and has a record of promoting deregulation is it a bit of a quandary here. No talk about how “business knows best” or “the government has no role in the boardrooms of the nation.” They know that the only thing that saved our collective asses was sound regulation. Notwithstanding that fact, I am not sure we can trust the Tories not to screw it up in the long term.

What is proposed by the G-20 countries is something like employment insurance for banks. The plan is to have banks contribute a small percentage of earnings which would go into a fund to help them if they start to fail. On the surface it sounds like a great idea. The issue it raises for me is can you trust the government with the money.

If the governments treated banks like they treat citizens they would put the plan in place, collect the money and then spend it as if it was general revenue. Then when the banks did get into trouble they would give them a fraction of what they should be entitled to claiming that to give more would stiffly productivity or something else as just as bogus.

The problem is, the only way this plan will work globally is if every nation buys in. If not, international banks would simply transfer funds to a country that doesn’t have such a tax. So what we have is a great plan which is probably doomed to failure because of Canada’s willingness to screw up any agreement by refusing to sign on.

Harper who wouldn’t know a compromise if it climbed up and bit him on the ass has gone too far to backtrack now. So stand by for Canada to take, yet another hit to its international reputation.
Posted by .Gord Hunter at 11:20 No comments:

Some Days you Just Have to Wonder Who Buys These Things


I find the whole long gun registry issue very interesting. The Harper Government is rock solid behind Morden, Manitoba's own Conservative MP Candice Hoeppner's private member's bill. Guys like the fool on the Hill, the little known Garry Breitkreuz from Saskatchewan's Yorkton-Melville riding are solidly behind her harassing Liberal MPs who might vote with their party despite the pressure but on them by the Conservatives.

If you listened to them it is all about the cost of the registry which they being the government have the responsibility to bring under control and the hardship the registry is putting on gun owners. They claim they are just protecting hard done by hunters and the right to bear arms which of course is not a part of our constitution..

Well several of those "hunters" have been buying up a Chinese made Norinco Type 97A rifle nicknamed the bullpup. Apparently the RCMP have recently gotten interested in this firearm. Apparently it can be quite easily be converted so that it will fire on fully automatic. The cops, quite rightfully are a bit concerned about what these "farmers" and "hunters" might do with these guns.

This would be an opportunity for the registry opponents to stand up and make a few points for being responsible and reasonable. You would think so anyway. Instead, the National Firearms Association of Canada is trying to challenge the RCMP's right to declare this killing machine a prohibited weapon, in court.

The government, careful not to annoy the gun owner crowd will reimburse the full cost, about $900.00 for these guns if they are turned in. A very rare move.

If you ever did wonder who buys these things are, have a look at some of the blog postings. These are some of the mild ones. I don't know. I just find their mindset a bit scary.