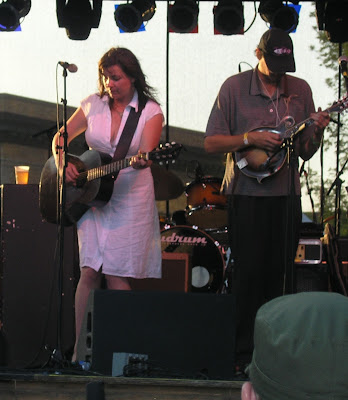 The Regina Folk Festival was this past weekend. It was a great success again.

There was a good line up, the stage was bigger and they seem to have solved the sitters vs standers issue.

We missed Friday night but went and stood in front of the stage most of Saturday night. It got pretty crowded by the end of the night and by the time we left my back was killing me.

Sunday I went down to the festival by myself. I had a backstage pass as a board member so was able to sit a bit so my poor aching feet were better. The line up was really good and I had a very good time.

I really enjoyed Amy Millan, a member of the Stars, who was playing her last gig as a solo artist and who is heading back east to work with the band again. That is her in the picture.

Rachelle Van Zanten, who used to be a member of The Painted Daisies while they were together was fantastic and Black Umfolosi, an a capella group from had the crowd eating out of their hands.