Say no to the the Prorogartion of Parliament

Don't forget to get out into the snow and join the thousands of Canadians who are saying "No" to Harper's prorogation of our Parliament.

Speak out against the arrogance and speak up about Electoral Reform.

If you can't make it out, at least sign the Declaration of Voter's Rights. Click on the button below. 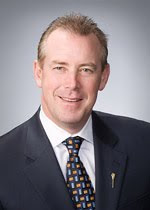 I am constantly amazed by the Regina Leader Post's priorities when it comes to news. Today's front page celebrates the naming of a new football VP with a headline as big as one would expect when announcing a huge world event.

Tucked on the inside of the paper however was a story which most people should be shocked by. If Saskatchewan were a country, its infant mortality rate, at 8.3 death per 1000 live births, would fall behind Cuba, Croatia, Chile, Mexico and Turkey just to name a few. The study is printed in Pediatrics and Child Health a publication of the Canadian Pediatric Society.

Even worse in one of Saskatchewan's northern Health Districts the rate is 14.5 which would put them behind Sri Lanka, Serbia, Uruguay, and Jamaica. According to statistics issued by the United Nations that would put that health district behind the rates of 75 countries in the world.

Somehow the Health Minister, Don McMorris, doesn't seem to have anything to say about the issue and Saskatchewan's number one booster and Premier Brad Wall has managed to steer clear of this shameful reality. The Teflon Premier has left it to bureaucrats and Health officials to try to diminish the impact of the report and no doubt Saskatchewan news outlets will let him get away with that.

Another alarming, although not surprising statistic in the report is that after suffering year upon year of successive governments chipping away at Canada's social safety net we have, when it comes to infant mortality, fallen from 10th lowest in 1980 to 24th place today.

Get ready for even more cuts. Brad Wall and Stephen Harper are already sharpening their knives.
Posted by .Gord Hunter at 08:09 2 comments:

Where is Paladen When you Need Him 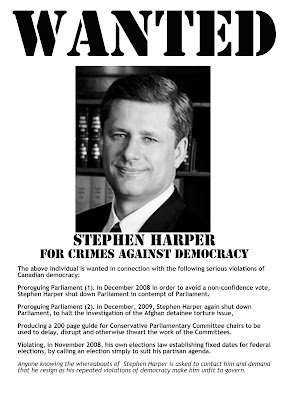 You have to be almost my age to remember the old TV bounty hunter Paladin in Have Gun Will Travel. Kind of Dog Chapman but with no SUV, no technology, no preaching and some class.

I love a campaign where everyone has a good time, expect perhaps for Stevie.

The wanted poster is downloadable. Click on the picture then right click to download it. It is 11 X 17 and would look great on power poles.
Posted by .Gord Hunter at 18:08 No comments:

Speak up about Prorogation On December 30th, 2009, for the second time in as many years, Prime Minister Stephen Harper has asked the Governor General to prorogue parliament.

In doing so, Harper has avoided taking responsibility for the treatment of Afghan detainees. He has also stopped in their tracks 37 pieces of legislation that impact regular Canadians like you and I.

Saturday, January 23, 2010 please join your fellow citizens in sending a strong message to the Prime Minister that we will not stand idly by while he suspends democracy in Canada!

We need electoral reform in Canada. It is time we did away with our first past the post system and caught up with the vast majority of the western world and brought in proportional representation.

In Regina the rally is at 1:00 on the Scarth Street Mall, near the Buffalo

If you live in Saskatoon the time is the same and will be held at City Hall Square on the south side of City Hall, 222 - 3rd Avenue North.

In Prince Albert the rally will be held at the Union Centre.

The USA has always had difficulty with the concept referred to as the separation of church and state. It always strikes me as odd that in a country which claims welcome people from every culture, even their money says "In God we trust" It must make it uncomfortable for those who don't fit into that handy Judeau-Christian slot.

Just like many sports teams that have a little prayer asking God for help before going out onto the field to beat the crap out of each other, the Army, and Air Force in particular are out there, killing the enemy for God. This whole thing is just a bit too close to the Al-Qaeda philosophy for me.

Today I read several stories on line revealing that the rifle sights the US Army and Marines use are stamped with Bible references John 8:12 and Corinthians 4:6.

I don't know about you, but this whole thing gives me the creeps.
Posted by .Gord Hunter at 08:49 No comments: 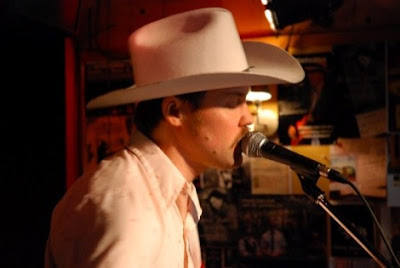 Last night most of us, in town for the folk Festival meetings went over to the Virtigo Theatre, situated in an ironically appropriate location, at the foot of the Calgary Tower, to see Buzz Job, billed as the true story of Cal Cavendish.

This calaboration between David van Belle and Kris Demeanor brings us Cal Cavindish's last gig and walks us through Cal's life and what for him was the last straw and the event/adventure that changed everything.

Kris Demeanor and his Crack band give us a great story and some really good music, some of Cals, some written by Chris Demeanor. It is a sad and funny story. I am not sure when I have laughed so much.

As an added treat, Cal was there last night and after the play was invited up to play a few songs and to meet the audience.

The play has a short run so, if you happen to be in Calgary. Get a ticket pronto.