Out here, in the nether reaches of Saskatchewan  to be exact, we don't get Sun News Network, also called, FOX North or as the Tories like to refer to it The Harper News Network.

It turns out it is just as well.

I think you will find the link to the below video interesting. Basically the Sun News "interviewer", to be generous, a Jersey Shore reject, tries to interview well known dancer and choreographer, Margie Gillis and falls flat on her face.

The Blue Meanies fought hard to get Sun News their broadcasting licence, overturning the CRTC. With the Sun News Network on air the Tories now feel that journalism in Canada is much more balanced than it once was.

I think it is an opportunity to look deep into the Conservative soul, just in case we 60 percenters weren't sure why we didn't vote for them.

Have a look at the interview here

I am sorry you have to sit through the commercial at the head but persevere.

And, just as a reminder about journalistic integrity take a few moments and listen to Don Henley
Posted by .Gord Hunter at 07:40 3 comments:

Here is a Question for you Jack 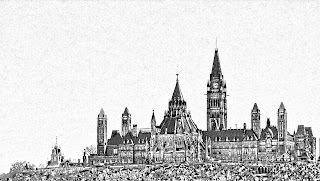 So here we are. The election is over, Ottawa has a new, but not necessarily better look to it and many of the 60% or so of Canadians who didn’t vote for the Blue Man Group are wondering what happened. More and more are asking themselves, “Isn’t it time we took a hard look at our electoral system.” The first-past-the post system just doesn’t cut it.

All that considered I think that Fair Vote Canada has a great suggestion for Jack Layton’s first Question in the new Parliament. They are nudging the new Leader of the Opposition to ask:

Mr. Speaker, in 1996, when the right was divided and we seemed to be faced with the prospect of “Liberal government forever”, the current prime minister, who was then out of elected office, co-authored and published with Tom Flanagan a remarkable article entitled “Our Benign Dictatorship”. In this thoughtful and well researched article, they decried the way that our first-past-the-post voting system creates one-party rule “beset by the factionalism, regionalism and cronyism that accompany any such system.” They said, and I quote, “For Canadian democracy to mature, Canadian citizens must face these facts, as citizens in other countries have, and update our political structures to reflect the diverse political aspirations of our diverse communities.”

They went on to decry the hugely distorted election results in the 1993 election, in which the Reform party won 52 seats with 19% of the votes, but the Progressive Conservatives, with 16% of the votes, won only two seats, while the Bloc Quebecois, with only 14% of the votes, won 54 seats and formed Her Majesty's “Loyal” Opposition.

“Imposing a first-past-the-post voting system upon a society with deep ethno linguistic and regional cleavages,” they said, “inevitably fragments Canadian conservatism,” adding that, ”Our system has similarly fragmented social democrats.”

They encouraged the Reform and Progressive Conservative parties to advocate electoral reform, and suggested the NDP would vote for it too.

“No one who cares seriously about ideas,” they said, “whether conservative, liberal or socialist, should be happy with the thought of prolonged one-party rule,” because, they pointed out, it leads to cronyism, corruption, cynicism and chaos.” The absence of effective competition,” they said, “is just as bad in politics as it is in economics.”

“Voters on the left,” they pointed out, “are as much entitled as voters on the right to effective representation.”

They went on to point out that, “In today’s democratic societies, organizations share power. Corporations, churches, universities, hospitals, even public sector bureaucracies make decisions through consultation, committees and consensus-building techniques. Only in politics do we still entrust power to a single faction expected to prevail every time over the opposition by sheer force of numbers. Even more anachronistically, we persist in structuring the governing team like a military regiment under a single commander with almost total power to appoint, discipline and expel subordinates.”

They conclude by saying, “Many of Canada’s problems stem from a winner-take-all style of politics that allows governments in Ottawa to impose measures abhorred by large areas of the country,” and “Modernizing Canadian politics would not only be good for conservatism, it might be the key to Canada’s survival as a nation.”

Mr Speaker, we on this side of the House couldn’t agree more with all of that, so my question to the Prime Minister is this: Now that you have won a majority government on the basis of having received less than forty percent of the votes cast in the election, do you still believe in proportional representation?

Then Fair Vote suggests that Jack follow up with the following supplementary.

Mr. Speaker, historically, up to 80% of votes cast for the NDP federally have been wasted votes—they did not help to elect anyone, and our party has always had about half as many seats in this place as we should have won based on the number of votes we received. That has changed, Mr. Speaker, and today, the New Democratic Party is actually slightly over-represented in this House.

We do still support proportional representation, Mr. Speaker, and my supplementary question to the Prime Minister is this: When will his government put forward amendments to the Canada Elections Act to give Canadians a modern, fair, proportional voting system, so that every Canadian can have a vote that makes a difference? When they do, Mr. Speaker, we will vote for it.

I don't know if Jack reads what Fair Vote writes about the issue but I hope he does. That question would get people's attention. Let him know this is a great idea.
Posted by .Gord Hunter at 08:56 1 comment:

Jim Flaherty would have Canadian’s believe that the retread budget and the fiscal policy he intends to inflict on us Canadians will save us from another recession and bring prosperity back to the country. The only way to do that he says is through cutting fat in Ottawa. When he talks about bloated Ottawa administrations somehow I don’t think he is talking about the PMO. Don’t expect cuts there.

Flaherty expects Canadians to believe that the Blue Meanies alone can save us all from financial oblivion. I think he expects us to believe that if it wasn’t for him, Harper and the rest of the Blue Man group we would have gone the way of Ireland long ago.

Now he boasts that the Conservative policies will bring us out of deficit spending by 2015. A year earlier that expected. No one actually believes he will but, it gets good media coverage and Canadians are a forgiving lot. After all this government has the new and daunting task of keeping the spendthrift socialists away from the door of the Bank of Canada vault.

What Flaherty forgets is that without the unnecessary reduction he made to the GST, we wouldn’t need to make the cuts he is now suggesting are crucial.

The other thing that Harper and Flaherty don’t ever want Canadians to look closely at is what the Conservative financial record really is.

Brian Mulroney in 1993 had run up a $38 billion deficit. Canadians were shocked.
Under Liberal leadership, Jean Chretien and Paul Martin had beaten the deficient and by 2006 when he lost the election the Government was running a $16 Billion surplus.

Under the Harper/Flaherty regime the deficit is up over $55 Billion.

And these guys ran on their economic record. We must be really stupid.
Posted by .Gord Hunter at 07:00 1 comment:

I'll Always Have Time for Those Who Protest 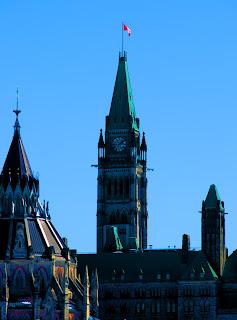 I was surprised by some of the reaction to Brigitte DePape brief protest in the Senate chamber last week. Not by the overwhelming on-line support, but by some of the politicians’ responses.

She has become a folk hero in cyberspace but, even politicians who we might expect to be a bit more tolerant of her actions pretty much trashed her protest.

It was expected that the Jason Kenny’s of the world would wade, outraged but I was a bit disappointed when Jack Layton gave us all a little lecture saying “We have been pushing for decorum in the House of Commons. You don’t have decorum if people are standing up holding up signs in the middle of debates and solemn moment. We encourage protests; it is part of a great long tradition of democracy. But it should be happening at the proper place and at the proper time.”

I have heard that kind of response from the “left” before. There is seldom is a "proper place and proper time" if it is inconvenient. Protest is great but just don’t do anything that might draw attention away from Jack.

Implying DePape used the wrong venue to stage her protest, even Elizabeth May waded in saying “Essentially, in theory, we’re in the presence of Her Majesty, that is the sovereign, That isn’t Stephen Harper’s room. That’s somebody else’s room.”

Oh Pleeese. In the presence of her Majesty?

It took 20 seconds out of Harper’s big day. No one was hurt. It wasn’t even noisy. Stephen Harper looked pissed off. So what?

She lost her job as a page but, I can’t imagine that paid very well anyway, knowing how the government is usually eager to exploit our youth. At least now she has a few better opportunities to choose from.

American documentary film maker Michel Moore offered her a job and issued a statement saying “For a young person to do that and to do it peacefully, and quietly and with grace, I thought it was a very powerful moment. Every now and then there is an iconic moment where an individual takes action, and it inspires others to think about, you know, what else we would be doing.”

The Public Service Alliance stepped up and said they would hire her if she wanted to work for the union, and the Council of Canadians offered her a job in their organization. Not bad for someone who just graduated.

I agree with DePape when she says, “Contrary to Harper’s rhetoric, Conservative values are not in fact Canadian values. How could they be when three out of four eligible voters didn’t even give their support to the Conservatives?”

Is a Harper Majority fair? Not in your life.

Is it legitimate? You bet.

The Blue Meanies did manage to gain a majority with less that 40% of Canadians supporting them but, they did it using the rules in place. Our first-past-the-post electoral system isn't fair but, Harper didn’t do anything the Liberals haven’t done before him.

And, we let them do it.
It takes guts to stand up and do what that young woman did. She gets my vote, hands down.
Posted by .Gord Hunter at 09:49 1 comment: