Read the whole thing here
Posted by .Gord Hunter at 09:52 No comments:

Having a look at the Pro-rogue 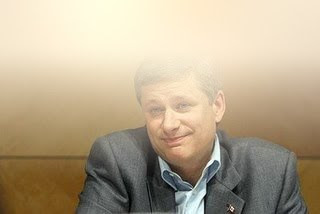 I can't help but wonder if this prorogation of Parliament is just the issue to send Canadians scurrying away from Stephen Harper.
Say what you will but, so far at least, Harper has proven himself to be a master strategist. He has done a good job of reading what Canadians back in the hustings take offense to and what will just piss off the elites and the pundits.
Has he gone too far this time? I guess we'll have to wait and see but, if the e-mail lists I am on is any indicator, he may have over reached.
What plays into Harper's court is the simple fact that most Canadians don't know or, don't care how their Government works. If they ever did learn about the British Parliamentary system at all, their minds have been warped by years of watching Fox news and CNN. Either that or they don't care.
When Parliament sits again in March Harper is counting of Canadians being so dazzled by the Olympics that any of his transgressions will be forgotten by Canadians. For Harper, the Olympics are like photo-op heaven. For some reason, Canadians seem charmed by this strange awkward man.
Let's take a look at what happened. Historically, the Prime Minister will visit the Governor General just before he/she calls an election. The GG is asked to prorogue Parliament, which effectively stops business then the PM calls a press conference to announce to Canadians that we are going to have an election.
In this case Harper has simply shut down the Parliamentary/democratic process so that his government can stop having to dodge questions from the opposition. No Parliament, no questions. And, don't forget, now he has done it twice.
I am told that Parliament has not been prorogued in this manner, while there are still pressing questions to be answered and there is still business on the order paper since the time of Charles I of England. In that case the King did the dirty deed not the PM.
Where is the Governor General in all this? Who knows? In most cases the PM heads down the road to Rideau Hall, has a meeting with the GG then quietly and with dignity announces an election. In this case Harper rang up Michaelle Jean, made his demand, she turned turtle, Harper's PR guy issued a press release, done deal.
So where does that leave us?
So Harper and the Pinocchio gang don't have to answer and more pesky questioning about Afghan prisoner transfers, they won't have to make up any more perky responses about the economy and they can continue to ignore the growing climate crisis without anyone challenging their failed environmental policies.
Jack Layton has a few more months to come up with something better that "Sitting around the kitchen table and talking to working Canadians."
Michael Ignatieff has bit more time to re-brand himself as something a little more down to earth than the little guy from Upper Canada College - Canadians are generally suspicious of intellectuals - and to work on his warm and fuzzy routine. (Remember Harper with the kitten)
Let's hope they get it right. I am not sure I can take much more of the divine right of Steven Harper to rule my country. 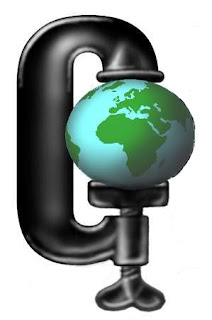 So what the hell - damn the torpedoes - bring it on. I am going to enjoy this decade.
Posted by .Gord Hunter at 08:02 No comments:

A too rare Moment in Time

Well, the tourtiere and turkey are all eaten, the pressies are all opened, the drinks are drunk and our visitors have all headed home.
The tree is still up but, not for long. It is back to life as we know it and that tree will soon be standing in a snow drift, waiting for a city truck to take it to it's final resting place.
It was a great Christmas for both of us. Full of sons and daughters, partners, girlfriends and grandchildren. I am always amazed at how we can all just seamlessly pickup after being apart for in some cases quite a long time. I guess that is what being family is supposed to be.
We spend some grand time with good friends.
It was all a too rare moment in time
Posted by .Gord Hunter at 11:14 No comments: