Where do the Come From

I am always curious to see where visitors to this blog come from and what they were looking for when they came across it. I'd like to think that I have a large fan base who visit regularly but I know there are only a few returning readers who drop in every few days. So most visitors are random drawn in by search engines.

I have a tracker on the site so I know where visitors come from. A posting from several months ago titled Doctor Poaching seems to draw most first time readers these days. The tracker also offres a recent visitor map which I always find intriguing. I hope you do too.
Posted by .Gord Hunter at 10:28 No comments: 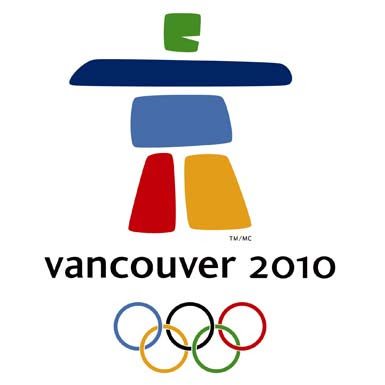 I have been trying very hard not to blog about the Olympics. There is so much about the way the Olympics are run that I find offensive. McDonald's as the official restaurant sponsor or wherever it claims to be, is preposterous just for a start.

But first I have to say, in all honesty, there were a few of the things I really did like about the games.

However, I sometimes wonder where these people that run things came from and how they got so far off course. To start with, their choice of sponsors was awful.
The IOC decided to remove Right to Play from any official status because of RTP's sponsors automobile maker Mitsubishi and Scotiabank. I can only guess that General Motors and RBC didn't like that. Canadian Olympic old fart Dick Pound explained it all saying "When you raise a lot of money from people who support your exercise, you can't have them ambushed by somebody else" His definition of the word ambush must be a bit different than mine.

Trying to censor performers by making them sign an agreement that they would not criticize the game was really stupid. It make Canada look like some China or the old Soviet Union.

Restricting facility access to anyone who wasn't a Canadian athlete was the worst example of poor sportsmanship I have seen for some time. If there is going to be an even playing field athletes have to be able to practice on the facilities they will race on. Some will argue for years that the decision most likely was the reason that 21 year old Georgian luger Nodar Kumaritashvili, miscalculated and flew off the track smashing into a metal girder and died.

And finally this Own the Podium thing was dumbest, most misguided program ever. I noticed today that they have Ken Reid trying to do a bit of damage control in the Globe and Mail. It will take more than that. I think most Canadians were embarrassed by it.

Don't get me wrong. Medals are great but they aren't everything. I never want to hear Canadian commentators talking about losing the gold, having to settle for silver and letting Canada down. It is the kind of response we expect from the American networks but it just makes CTV look bad. The Olympics is supposed to be about celebrating athletes personal best. Lets' celebrate that.

I for one, look back fondly at the days when kids from less favoured nations sewed Canadian flags on their back packs, when Canadians were thought of as polite, when we weren't jingoistic and when our soldiers were peacekeepers.
Posted by .Gord Hunter at 08:16 No comments:

Interesting that no western government has really spoken up to condemn what most are agreed was a hit by Mossad, Israel's intelligence and espionage agency on Hamas leader Mahmoud al-Mabhouh in Dubai recently.

Oh, to be sure several countries have expressed their displeasure that the Mossad hit squad used forged passports in the names of a group of people from Australia, the UK, Germany France and Ireland. This is an old Mossad trick. In fact in the past they apparently used Canadian passports while up to their dirty work not so long ago.

If governments are to have any credibility at all, they are going to have to condemn acts of terrorism, those perpetrated by their friends as well as their enemies.

What is the Puffster Doing Now? 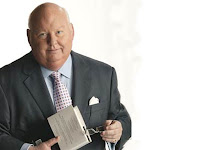 Remember when Mike Duffy was made a senator? It wasn't all that long ago. He was in the same bunch with Pamela Wallin and Nancy Raine Green. At the time the Puffster as Frank magazine use to call him said, "I'm not much or a partisan" but claimed he agreed to take on the job because Harper said he needed his help reforming the Senate.

Now Duffy and the old skier Nancy Green Raine have launched an video ad trying to give the Harper government a much needed bounce after the Olympics. This video is over the top particularly for a so called "non-partisan". I tried to find the original but couldn't. A few people are having fun with it however. Have a look here.
Posted by .Gord Hunter at 14:04 1 comment: 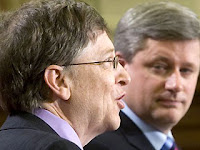 You'd think we'd be used to it by now.

Virtually every "new" initiative announced by the Harper government gets rolled out 2 or 3 times. Often over several months. Amazingly they usually get reported 2 or 3 times as well. Sometimes by the same reporter who must wonder why his/her editor is sending them to cover the same old story again and again.

You have to give the PMO's Department of Deception and Deceit credit. Who knew you could get so much bang from the same buck.

The reality is however that many of these announcements are just that. A media hit. The money is never really spent. The projects are canceled. And Canadians forget.

The difference is that when they scrap the program they spent so much energy to promote. They do it quietly.

The latest one of these comes three years less a day after Prime Minister Stephen Harper stood there, all puffed up beside Bill Gates and promised $111-million which would be used in the search for an AIDS vaccine. Bill was putting up $28 million

The Harper government has scrapped the program and now says the manufacturing plant isn't needed anymore and that the Canadian researchers weren't up to the task anyway.

Don't look for little Stevie's face anywhere near the latest announcement however. That was quietly posted on the Canadian HIV Vaccine Initiative website. No sign of Bill Gates either and the link to his foundation on the CHVI website has been disabled.

Ok Canada, tell me please. Why do we put up with this?
Posted by .Gord Hunter at 12:58 No comments:

An Injustice, Pure and Simple

Just before Christmas Federal Court Justice Richard Mosley threw out a security certificate against Syrian born Hassan Almrei who had been arrested eight years earlier on submissions of terrorism. Simply put, Mr. Almrei didn't do anything to justify keeping him locked up. The judge's ruling is just one of several recent decisions which continue to chip away at this controversial legislation.

Harper and his crew like these certificates. I think this fits into their agenda to make Canadians afraid. It is very like their tough on crime strategy.

When parts of the security certificate process were found to violate of the Canadian Charter of Rights and Freedoms and ruled unconstitutional by the Supreme Court of Canada in 2007. The Conservative government responded by introducing introduced a bill to amend the security certificate process by introducing a "special advocate", lawyers who would be able to view the evidence against the accused. However, these lawyers would be selected by the Justice minister, would only have access to a "summary" of the evidence, and would not be allowed to share this information with the accused, for example in order to ask for clarifications or corrections. The amendments are modeled on a much-criticized process already in use in the United Kingdom.

The Conservative bill amending Canada's security certificate regime, with support from the Liberals, was passed by Parliament and received Royal Assent in February 2008.

So we continue to have laws being used in this country that do not meet even the most basic test. CSIS has exploited these security certificates to incarcerate people based on shoddy investigative work. And ministers of the crown rubber stamp these certificates based on the work of incompetents. I don't know about you but, it makes my skin crawl.

There are however a few things about Mr. Almrei that get under my skin too.

I guess when you don't have ties to terrorists then spend eight years in jail because our bungling security agency screwed up and thought you did, you come out a bit bitter and with a sense of entitlement.

Notwithstanding that, I can't agree with Almrei's statement that "This is my country. It is my country as much as it is yours."

I'm sorry Mr Almrei it isn't. You are not a Canadian citizen. You abused our system by coming into our country using forged documents then used them to apply for refugee status. Not to mention that other aspects of your conduct before your arrest was hardly exemplary either.

But eight years out of anyone's life is a long time.

Does the fact that CSIS and some federal cabinet ministers breached their duties of "good faith and condor" as the judge suggests they did entitle you to stay here? Maybe it does. Does the fact that you spent eight years in jail on a security certificate without even being charged entitle you to an apology, compensation and the right to stay here in Canada? I'd have to say, "I think so"

So come on CSIS, it is time to go public, cap in hand and apologize. It is also time for the government to compensate Mr. Almrei for losing eight years of his life. And it is time for this government to scrap these ill conceived security certificates which go against every reasonable rule of law in what we like to think is a democratic country.
Posted by .Gord Hunter at 07:44 No comments: