I thought I was Cynical

I always find it interesting when the "law and order" Harper government acts as though they are above the law and ignores its own rules and regulations. Particularly when they wrote the rules themselves. 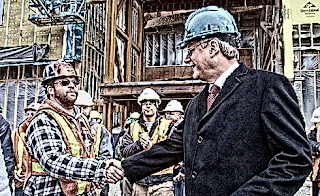 The government developed rules around websites which would make the line between what is government information and what is party propaganda fairly clear. The rules which only came into effect in 2009, set standards for government websites to make sure that they are credible, technically accessible, uniform and non-partisan. Then along came the economic downturn and the Economic Action Plan and any notion of things being non-partisan flew out the window.

Remember those times? Harper's communications people got busy setting up photo-ops with Tory MPs handing out oversized cheques with Conservative logos plastered all over them as often as they could. The re-announced funding for projects that had been trundled out months before. It was enough to make even the most cynical government watcher’s stomach turn over.

Canadian Press reports that senior civil servants advised the government before it went up that the website violated their own rules and that there was no way justify bending those rules to exempt the government in this case.

Any Prime Minister who thinks it is justified to shut down Parliament at whim isn’t about to be deterred by a few regs. He made sure it was approved anyway. It was pretty simple. He had Treasury Board President Vic Toews ignore the rules and give the project the go ahead using a lame excuse about their intentions to change to rules soon anyway. Of course they haven't. They can't afford the criticism.

These guys just don’t get it. Come on Canada. They have to go.
Posted by .Gord Hunter at 19:37 No comments: