If only to put an important issue, which came up in discussion at Bushwakkers last night, to rest. I pose the following question.

If toilet paper is supposed to roll off the bottom of the roll, as some claim, why do all the on-line photographs have it rolling off the top?

This also goes some distance in proving that,Cheryl is always right.
Posted by .Gord Hunter at 11:34 3 comments:

I have started re-reading a few of Ian Rankin's Rebus novels. I figure it just makes good sense considering that we will be flying in and out of Edinburgh and will spend almost a week in that city, early in June.

Fans will know that Rankin's detective has a special relationship with Edinburgh and I intend to have, at the very least, a single malt and a beer or two at the Oxford Pub, one of his, and Rankin's, old haunts.

We are hoarders, particularly when it comes to books, so I was pleased to find 10 of the 18 Rebus books in the basement. However, I was surprised to see such a big hole in my collection. I since managed to pick up most of the ones I didn't have. So the search is on for the remainder. The others, The Black Book and Resurrection Men I am looking for so, if any kind soul has a copy of one of them I haven't yet read, tucked in a corner bookshelf somewhere, consider lending it to me.
Posted by .Gord Hunter at 10:59 No comments:

Too Bad Obama Won't Get to Skate on the Canal 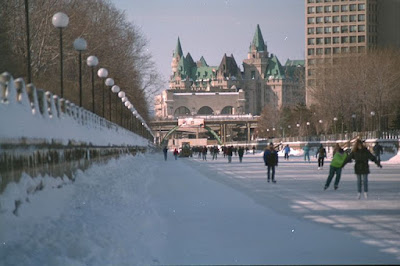 Well the saviour of the Western World is visiting Ottawa this week in his first state visit, if we can actually call a seven hour touch down a state visit. It is kind of State visit lite. He's not even here yet and already, I have had it up to here with this Obamarama.

Don't get me wrong. After two terms of what was possibly the worst administration in American history, suspicion of the United States' motives, particularly in the area of foreign policy had made many Canadians very wary of the USA. Barrack Obama is a breath of fresh air. His administration is welcomed by most Canadians if not by our prime Minister, who must see this new guy as a threat to his own very conservative policies. If Obama accomplishes a fraction of what the American people, and the World expect, it will be a great step forward.

Nevertheless, I am a bit put off to see the media clamoring to outdo each other with fawning displays of articles, opinion, photographs and route maps. I never quite get it. These trips are to a very large degree tightly scripted ceremonial events anyway. To be frank, I am just about Obamaed out before he even arrives.

The very least, what it does do however, is to start to pull us out of the political doldrums that have settled over Ottawa. After our brief flirtation with the idea of a coalition government was kiboshed when the Governor general put the boots to the idea, things have been pretty dull in our nation's capital. These are trying times for political junkies like me. Hopefully things will start to pick up. This week we are starting to see shades of the old Harper style re-emerging from its brief hiatus;
This visit is all Harper, all the time.

So, welcome to Canada Barrack Obama. Too bad you won't get a chance to skate on the Rideau Canal. Perhaps the Secret Service can't skate.
Posted by .Gord Hunter at 08:59 No comments: 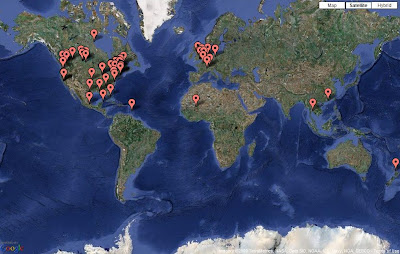 When I was considering starting a blog I often thought "Why bother, who cares what I have to say?"" I really never thought anyone much beyond friends and family would bother visiting anyway. In the end, I took it on as an exercise and a challenge more than anything else.

The blog became a look at things going on around me, personal, political and topical. During elections and political crisis I'm afraid it has become a bit of a place to rant about what was pissing me off but I do try, sometimes unsuccessfully, not to go over the line, what ever that is.

I haven't gotten a lot of comments left on the blog so curious, I have from time to time put a tracker on the site. The world map above gives me an idea where the visitors live. I have been amazed at times by where they come from and what subjects draw them in.

So, welcome to my blog. Nice to have you drop in.
Posted by .Gord Hunter at 09:37 No comments: