More Gord Hunters than you can shake a stick at 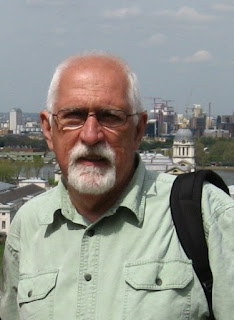 The day had a bit of a funny start I had a letter published in the Leader Post today, no big deal, just a rant about ethics during the recent election. You can read it on my Maple Leaf T-Shirt blog. The LP called me back this morning saying that another Gord Hunter, this one works for the Saskatchewan Government, called all pissed off that someone with the same name as his had a letter in the paper.

Now on one level I can understand his concern, the government in power is pretty vindictive and any thought that the public servant Gord Hunter, was less that loyal and it would be just like Alice in Wonderland - OFF WITH HIS HEAD.

On the other hand I have been putting up with the fact that there is a Gord Hunter who works as a City Counselor in Ottawa, where I used to live. We don't share a political viewpoints at all. He ran as a Liberal several times. Colleagues used to steal his election signs and send them to me just as a joke.

Also when my partner and I were first dating there was a right wing coloumist in B.C. called Gorde Hunter. Some of her collegues thought she was dating him. Now that was a scary thought.

There are more than one of us out there. Take a Valium. 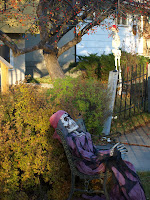 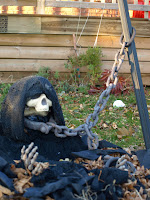 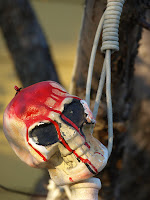 Every year since we lived in Montreal Chris and I decorate our yard for Halloween. Amazingly we have old Styrofoam gravestones that have traveled from Montreal, to Ottawa and on to a couple of different houses in Regina.
Posted by .Gord Hunter at 09:13 No comments: 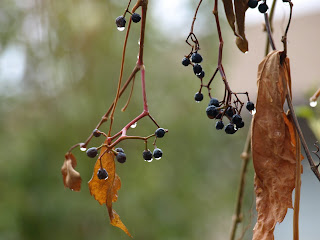 It was windy last night. Obviously something was blowing in and this morning here it is.
It is one of those cool rainy days that seems to sneak in and steal all your energy. It makes you just want to stay inside a read a book or have a nap.
A bowl of hot soup is what I need.
Posted by .Gord Hunter at 11:46 No comments:

15. The radio would be standard equipment but you'd need to install 64 Meg of RAM, a new sound card, a game card, a new video driver, and a CD drive to get it to play.

14. The speedometer would read 70 even though you are only doing 50.

14. For some reason the engine would take 5 minutes to boot up.

12. The steering wheel would be replaced with a mouse and you'd need to memorize the keyboard short-cut for "Brake".

10. The air bag system would say "Are you sure?" before going off.

9. New seats would require everyone to have the same size read end.

8. We would all have to switch to Microsoft Gas.

7. The government would be forced to rebuild all of the roads for Microsoft cars; they will drive on the old roads, but they run very slowly.

6. The oil, alternator, gas and engine warning lights or gauges would be replaced by a single 'General Car Fault' warning light.

5. You would be constantly pressured to upgrade your car.

4. Occasionally, your car would die for NO apparent reason and you would have to restart it. Strangely, you would just accept this as normal.

3. Occasionally, executing a manoeuvre would cause your car to stop and fail to restart and you'd have to re-install the engine. For some strange reason, you'd just accept this, too.

2. Every time the lines of the road were repainted, you would have to buy a new car.

1. People would get excited about the new features of the latest Microsoft cars, forgetting that these same features had been available from other car makers for years.

Well here it is Monday again. I guess it shouldn't make any difference what day it is to us retired guys but, a weekday means everyone else is either at work or university so my routine is different.

I have spent a few hours over the weekend and this morning reworking this site to make the blogs work like a regular webpage with links to my other blogs. That way it is easier to navigate and to post recipes and pictures in a straight forward format.

I will work away at the site for a few more days, fine tuning etc but then refocus some of my efforts to other things.
Posted by .Gord Hunter at 12:47 No comments:

This page has become mostly a portal site and a personal diary. It will take better shape as time goes on
Posted by .Gord Hunter at 10:27 No comments: