A Fine but Chilly Day 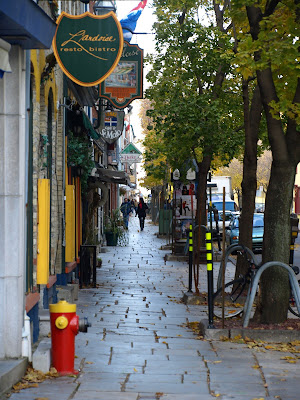 We wandered down to the hotel bar/restaurant about 9:00, sat in a window seat and had a tall black espresso and a warm, buttery croissant. What a great way to start the day.

It was chilly though. It hovered around freezing all day and it was windy so,in the shade, it was just like winter. When the sun came out it was beautiful.

We spent about five hours walking around the old city, slipping in and out of some amazing little shops. Quebec City really is one of my favorites. I wish I could figure out how to live here for a few months and work on my French which is getting pretty shaky.

Since we have been here I noticed posters for two entertainers who played the Regina Folk Festival. Pascal Picard, a Quebecoise who sings in English and Rupa and the April Fishes, an American Band. Rupa sings in English, French and Spanish. Seeing the April Fishes poster reminds me that there is a restaurant down the block called Poisson d'Avril.

We walked out again this evening and ate in a restaurant on the Casse-Cou stairs. Probably not the best choice but it was cold walking around.

Early up again tomorrow. We fly back to Regina in the morning.
Posted by .Gord Hunter at 16:35 No comments:

Morning really did come too early. A 7:00 train to Quebec City seemed like a great idea a couple of months ago when I booked it but...

I think we forgot it was Halloween until the skinny pirate moved in behind us in the lineup and started to talk away to us. The conductor was a Rastaman and made all the announcements in what he thought a very cool Jamaican might sound like speaking French. What do I know, perhaps he was right on. There are Halloween decorations all over Quebec City.

In our case, the train really was the way to travel from Montreal to Quebec. In Montreal, Central Station was no more than a couple of blocks from our hotel and the Gare de Palais is right in Quebec's Vieux Port, just a few blocks from out hotel.

We walked around the old city for a few hours, had lunch and wandered back to l'Hotel Belley and had a beer and a nap. I love this little hotel. It is right across from the market and a short walk to restaurants in the Lower Town in the old city. It is a climb up the hill however which may be more exercise than you planned for. You could walk along to Le Funicular and save yourself the climb.

This evening we ventured out again, keeping an eye out for ghosts and goblins along the way. There were small crowds of little kide trick or treating and lots of people in costume. We ate at Porto Fino which is a pretty dependable Italian Restaurant in Quebec. Quite boisterous and friendly. 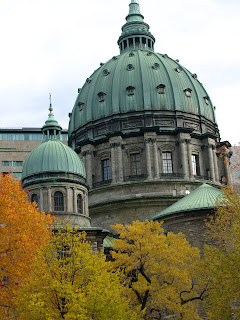 This is the last day in Montreal.

We took the train out to Ste Anne de Bellevue and took my Mum to Twigs for lunch. It was a bit of a blustery day. Sandy and Barbara met us it Ste Anne and we drove into town together.

We dropped into the Musee de Beaus Arts mid afternoon and walked back to the hotel. It was cool with snow up the side of Mount Royal but little sign of it when you got as far down as Ste Catheribe Street.

We took the metro that evening and met Sandy and Barbera for supper at a small restaurant on Rachel Street called Les Infideles It is a bring your own wine restaurant but more upscale than you would expect. I would clearly recommend it. It has very good food but I'd suggest going on a slower night. On a busy Thursday night it was quite full and noisy.
Posted by .Gord Hunter at 16:25 No comments:

Here we are in Montreal 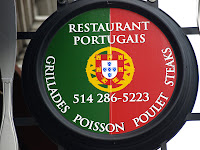 We flew into Montreal yesterday. It was pretty uneventful which is about as good as it gets when it comes to flying. The forecast for Montreal suggested rain and were they right about that. It was pouring and obviously had been all day.

After a typical and frightening cab drive into the city we settled in to the Delta Centreville.

I have an aversion to eating in hotels so rain or not, we walked out to Old Montreal and found a small Portuguese restaurant on Place d'Youville called Porto Mar. It was very good but quiet with the weather.

I had a tradition Portuguese meal, grilled sardines. They were great.

I went to the convention this morning. Saw lots of people I hadn't seen in a while then bailed out. we walked down to Old Montreal for lunch.
Posted by .Gord Hunter at 15:06 No comments: