Anyone who follows my blog will know that I don't hesitate to take issue with  my Member of Parliament Tom Lukiwski when he or his colleagues in the Harper Government take positions I believe are untenable. .

After I received what I felt was an inadequate and inaccurate response to a letter he wrote to me about my concerns to cuts to the CBC I responded to him electronically and then I posted the text of that e-mail here.

I wasn't surprised, but I confess to being a bit disappointed at his intemperate response to me. I always felt it was my Member of Parliament's duty to represent the wishes of his constituents to his caucus. Apparently Tom Lukiwski only represents Conservative Party members and others who blindly support any positions their government puts forward.

Below is my latest letter from my MP. Interestingly although it doesn't clear up the inaccuracies in his first letter it does show how he really feels about the Canadian Broadcasting Corporation. If nothing else the honesty is refreshing.

I know it a bit tough to read but clicking on the letter will enlarge it. 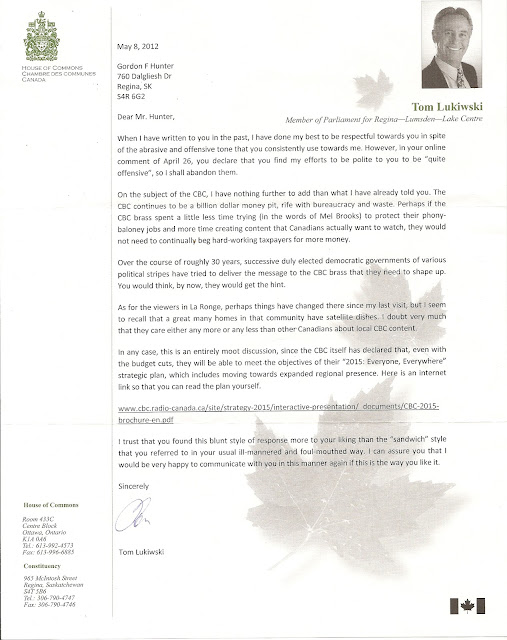