An Unprecedented Miscarrage of Justice 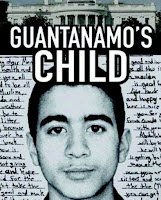 In an unprecedented miscarriage of justice the American government's trial against child soldier Omar Khadar started yesterday. The judge ruled yesterday that statements extracted from Khadar by the US military using torture will be allowed to be put into evidence. Khadar was 15 years old at the time.

Perhaps the Globe and Mail said it best in their editorial today. "It is difficult to imagine that a 15-year-old, handcuffed to a stretcher after surgery, bullet holes in his chest and his eyes full of shrapnel would feel anything but coerced during interrogation. Yet a U.S. military commission judge ruled yesterday that statements given eight years ago in those circumstances by the Canadian Omer Kader to U.S. authorities at a prison camp in Begram, Afghanistan, were reliable and not the product on coercion"

In her book Guantanamo's Child Michelle Sheppard reports that  he was bolted to the floor, hands and feet bound together. Left in that position for a long time, he eventually urinated on the floor. Guards poured pine oil on the puddle and then used Khadr as a mop. On more than one occasion, he was threatened with rape during interrogations

The very existence of  the Guantanamo prison, located on Cuban land occupied by the U.S. is a travesty in and of itself. Omar Khadar is the only remaining citizen of a western country held there whose government had not taken action to repatriate him.

Canadians should be outraged not only at the illegal actions of the U.S. government but at theshameful  inaction of our Prime Minister, Stephen Harper.

It is raining again

We have had the oddest summer here on the prairies. It is raining again this morning in Saskatchewan.
We were saying over breakfast, "It is just like living in Vancouver without those pesky mild winters and with no need to work in your garden for eight months of the year"
Posted by .Gord Hunter at 09:02 No comments: