Come on Harper, Do the Right Thing 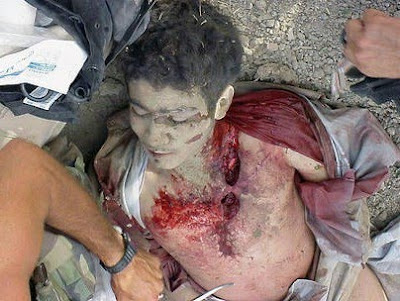 Friday the Supreme Court ruled that Canadian officials violated Omar Khadr's constitutional rights, but the judges, to no one’s real surprise left it up to the federal government whether to ask the United States to return him to Canada. Under Stephen Harper leadership the Conservative government has strongly opposed the child soldier’s repatriation, but his lawyers and several interested groups argued before the high court that Canada should request his return.

Disappointingly, the court said that the government must "decide how best to respond to this judgment in light of current information, its responsibility for foreign affairs, and in conformity with the Charter." Justice Minister Rob Nicholson replied to the decision saying that the government would review the ruling "and determine what further action is required."

Don’t hold your breath however. The Harper Government had blocked attempts to repatriate Khadr vigorously at every juncture.

It is worth while reviewing the case.

Omar Khadr was born into a fundamentalist Muslim family in Toronto. Shortly after his birth the family moved to Pakistan returning to Canada in 1996. They returned to Pakistan then to Afghanistan where his father moved him to live on Osama bin Laden's compound.

It is thought that his parents raised him to believe that religious martyrdom was the highest achievement he could aspire to. At the age of 12 they began to give him military training.

In July 2002, an American Special Forces unit learned that a group of Al Qaeda fighters was operating out of a mud-brick compound in Ab Khail, southeast Afghanistan, a small hill town near the Pakistani border.

The short story is that when the Americans arrived at the compound, they looked through a crack in the door and saw five men armed with assault rifles sitting inside. The soldiers called for the men to surrender. The men refused. The soldiers sent in their translators to negotiate. Not surprisingly, the men in the compound killed the translators. The American soldiers then surrounded the compound and called in air support.

After the site was bombed, strafed, laid flat and silent they walked into the ruins. They had not gotten far when a wounded fighter, concealed behind a broken wall, threw a grenade, killing Sgt. Christopher Speer.

For several years the official story was that the soldiers immediately shot the fighter three times in the chest, and he collapsed however, in an inadvertent release to journalists it was revealed that the first draft of the report indicates that two of those men in the compound remained alive after the American response to the grenade. A U.S. soldier, identified in documents as OC-1, reportedly ran toward the firing and saw an adult male lying on his side, moving, with an AK-47 beside him. The American soldier shot him in the head, killing him.

A soldier identified as Soldier #2 walked into the alcove where the body is lying and feels the ground shift beneath his feet. When the debris is pulled back they find a boy lying face down, semi-conscious. He was slight and could have passed for thirteen. In fact it was fifteen year old Omar Khadr. . He was suffering shrapnel wounds which had blinded him in one eye permanently and temporarily in the other. He also suffered severe injuries to the legs all of which he got during the course of the air strike that crippled him before the attack. He was bleeding heavily three severe exit wounds in his chest which he sustained when the U.S. troops entered the compound. Amazingly, he was still alive.

He was patched up and sent to the infamous Bagram prison, His interrogation began as soon as he regained consciousness. He was repeatedly brought into interrogation rooms on stretchers, in great pain. Pain medication was withheld, apparently to induce cooperation. He was ordered to clean floors on his hands and knees while his wounds were still wet. When he could walk again, he was forced to stand for hours at a time with his hands tied above a door frame. Interrogators put a bag over his head and held him still while attack dogs leapt at his chest. Sometimes he was kept chained in an interrogation room for so long he urinated on himself.

Just a few weeks after his 16th birthday and at the end of October 2002, Omar was sent to Guantanamo. He and the other prisoners were dressed in orange jumpsuits shackled hand and foot, a waist chain cinching his hands to his stomach. Another chain connected the shackles on his hands to those on his feet. The cuffs permanently scarred many prisoners on the flight, causing them to lose feeling in their limbs for several days or weeks afterward.

Hooded and kneeling on the tarmac with the other prisoners, they waited for many hours. The prisoners were forced into sensory-deprivation gear that the military uses to disorient prisoners prior to interrogation. The guards pulled black thermal mittens onto their hands and taped them hard at the wrists. They pulled opaque goggles over his eyes and placed soundproof earphones over his ears. They put a deodorizing mask over his mouth and nose. They bolted him, fully trussed, to a backless bench. Whichever limbs hadn't already lost sensation from the cuffs lost sensation from the high-altitude cold during the flight, which took fifteen hours.

At Guantanamo, Omar was led, his senses still blocked, onto a bus that took the prisoners to a ferry dock. Some of the buses didn't have seats, and the prisoners usually sat cross-legged on the floor. They were told not to move, and when they did -- helplessly, with the motion of the bus, they were kicked.

Then he was locked in a steel cage eight feet long and six feet wide. Because the cage had a sink and squat-toilet and the bed was welded to the floor, the open floor space was comparable to that of a small walk-in closet. The cages had been hurriedly constructed from steel mesh and transoceanic shipping containers.

Before Omar Khadr had even begun to settle in to Guantanamo Bay, his captors began to torture him. He was immediately subjected to a regime of humiliation, isolation and abuse, including extreme temperature manipulation, forced nudity and sexual humiliation.

He says he was short-shackled by his hands and feet to a bolt in the floor and left for five to six hours, and that occasionally a US officer would enter the room to laugh at him. He said that he was “kept in extremely cold rooms,” “lifted up by the neck while shackled, and then dropped to the floor,” and “beaten by guards.” In one particularly notorious incident, the guards left him short-shackled until he urinated on himself, and then “poured a pine-scented cleaning fluid over him and used him as a ‘human mop’ to clean up the mess.” He was “not provided with clean clothes for several days after this degradation.”

In the early spring of 2003, Khadr was told by his interrogator "Your life is in my hands". The interrogator, who spat on him, tore out some of his hair and threatened to send him to a country that would torture him more thoroughly. He made specific reference to an Egyptian Askri raqm tisa ("Soldier Number Nine") who enjoyed raping prisoners.

A few weeks later, an interrogator giving his name as Izmarai spoke to Khadr in Pashto, threatening to send him to a "new prison" at Bagram Airbase where "they like small boys".

In all, Khadr has been reported to have been kept in solitary confinement for long periods of time; to have been denied adequate medical treatment; to have been subjected to short shackling, and left bound, in uncomfortable stress positions until he soiled himself.

He was subjected to the sleep deprivation technique commonly known by the Americans as the frequent flyer program. It is a program whereby detainees are constantly and systematically moved from cell to cell to disrupt their ability to sleep.

Every other country that had citizens held in Guantanamo, such as Australia and the UK, asked for and had their citizens repatriated back to their countries of citizenship. Only Canada has refused to follow suit.

By every definition Kadahr is a child soldier. I frankly cannot understand how our Prime Minister can on the one hand condemn the use of child soldiers by private armies in Africa then claim as his defence that Omar Khadr was not a child soldier and not covered by the treaties signed by Canada because, he wasn’t in any official army.

This action or lack of it by our government is shameful. Write to your MPs and ask them to live up to their responsibility or better yet. At the first opportunity, vote them out of office.

* Background material from The Globe & Mail, CBC, CTV, The National Post, Wikipedia, The Huffington Post and the Rolling Stone