Are we Going to the Polls? 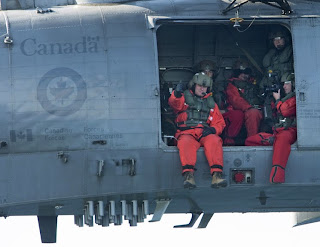 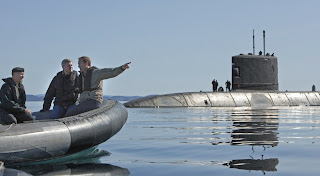 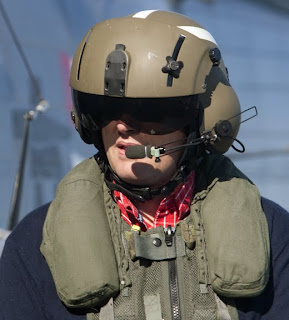 Just in case you were wondering about the likelihood of an election in the fall, the signs are there and my guess is that we are about 60% certain that Little Stevie will try and taunt the Liberals into forcing us into one.

The one thing we don't know is if Iggy has any more jam than Stephane Dion.

The NDP are pumped and ready to go, the Liberals are Sabre rattling their way through barbecues and town hall meetings, the Conservative/Alliance/Reformers are poised to re-announce just about every program they have ever thought up and who knows what the Bloc are up to.

Look out for a different campaign. Taking lessons from Vladimer Putin, Stevie has abandoned warm and fuzzy for stalwart and steely eyed.

What Canadian Prime Minister has ever spent five days observing military exercises. None that I recall. I spent eight years in the Canadian Navy and never saw a Prime Minister although I did see a Defense Minister once. That was Paul Hellier and we all hated him for his unification of the Armed Forces plan, but I do digress.

In the last week we have seen Harper;
This is the new militaristic Stevie, ready to take on the enemy.

I for one am having a bit of a hard time seeing the Ottawa dough boy in that light but he is trying hard to impress Canadians. The depressing part is that it might just work.
Posted by .Gord Hunter at 10:41 No comments: 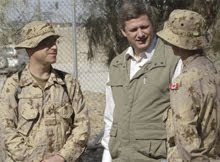 I was struck by a piece by Stephen Saideman from McGill University printed in the Globe & Mail today, suggesting that Canada will lose stature on the world stage when we pull out of Afghanistan in 2011. Saideman argues that, “Canada has gained a great deal of influence because of its willingness to lead and bleed in Kandahar” and he suggests that all that could disappear.” I wonder.

I wonder how the hell we got there in the first place. How our governments have been willing to trade our treasured reputation as a peacekeeper for a pat on the head from an ineffective American President mired in a conflict he seems to have barely understood.

I have to ask, where we have gained all this stature and influence as suggested in the article. Our Prime Minister may have been pleased do George Bush a favour but in my view, our stature as a nation took a huge hit. Lets face facts, it all makes Harper look like a toadie. There is nothing wrong with having differences with our neighbour to the south. Differences of opinion are a healthy part of any relationship. We have to ask ourselves, how did doing the American’s bidding help us out in our relationship with the rest of the world? Not one bit.

The article argues that other nations which have chosen to either sit this one out or to only supply troops in a non-combat role are suffering from a failure in leadership. He argues that they have shied away from the conflict “because of potential domestic political liabilities” rather than trying to sell the war to their peoples, no matter how unpopular it was at home. What a load of hogwash.

Most Canadians support the men and women who are serving in Afghanistan, be it in the armed forces or in a more humanitarian role working for NGOs or other groups providing aid. For the most part the soldiers are not there at their own choosing but at the bequest of overweight pasty-faced politicians whose misguided decisions have put them in harm’s way.

We were comfortable with our nation's reputation as a peacekeeper and I would argue that most Canadians are not comfortable seeing our troop in a combat role. Generally we feel we should never have committed our troops into this conflict in the first place and would be happy to see us bring our men and women home.

That is not a contradiction.

People like Saideman argue that we are making a huge contribution to that country yet, since 2004 there has been a 49% increase in insurgent attacks, a 100% increase in poppy production and Afghanistan has dropped 56 places in the annual corruption rating. It has to make one wonder how one defines these sorts of things.

From my perspective every damn day is a day too long to be engaged in that conflict but, I will live with a 2011 withdrawal. So, let us not be persuaded by the likes of Mr. Saideman.

Let's get out of this mess.

If my memory serves me right Martha Grimes’ detective Richard Jury or perhaps his old friend Melrose Plant drinks Old Peculier. All of her early Jury novels were named after pubs and they featured predominately in the novels.

Now Theakstons, the company that mixes up that fine British brew has given a nod back to the mystery genre, perhaps as a way of saying thanks, with the Theakstons Old Peculier 2009 Crime Novel of the Year Award. The short list for the readers choice award featured some of the UK’s finest crime writers. The winner this year was Mark Billingham’s novel Death Message which I confess I haven’t read (yet)

The short list offers a selection to keep most fans busy for at least a few months. This is the it:

A Cure for all Diseases (Reginald Hill)

The Colour of Blood (Declan Hughes)

Beneath the Bleeding (Val McDermid)

Friend of the Devil (Peter Robinson)

Just who are the10 Best Mystery Writers of our Time? 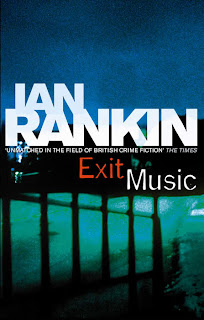 Over the weekend Scott pointed me to the Canada Reads website where their summer project is to name the 10 best mystery writers, of our time. The site's creators and the CBC seems to think that August is the best time to read mystery novels. I personally think that idea is tied to driving up to the cottage in the Muskokas or somewhere like that and spending your time reading on the dock by the lake. I don't know about you but I read mystery novels all year round.

I love their idea nevertheless.

My list of favorites is long and was tough to narrow it down but, I have read all 20 of Ian Rankin's Rebus novels. I have a soft spot for Detective Inspector John Rebus and when I was in Edinburgh this summer I scoured the city for his old haunts. The Oxford Bar, Mary King's Close, Fleshmarket Close, St. Leonard's Police Station, Arden Street, Salisbury Crags and the meadows.

So, who do you read? Who do you like best. Check out Canada Reads and add your choice and tell them why. I hope Ian Rankin is within your choices. Have fun.

I think they are a bit slow to post peoples comments but I guess we can't expect the moderator to work weekends.
Posted by .Gord Hunter at 09:01 No comments: I have found it tough to blog as much as I'd like, during the summer. It seems much easier in the winter when the weather is lousy and I don't want to go outside so, I have been slacking off a bit. Even a less than spectacular summer in Saskatchewan is still summer and we have to appreciate each and every day of it.

Some times it take a hook to draw me in.

I have to share with you one of the quirkiest website I have seen. Chris found it and tipped me off to it. The guy who created it says,

"My friend, Jørgen, doesn't believe I can collect one million giraffes by 2011. I'm gonna prove him wrong, but I need your help. You can create your giraffe(s) in any way you like, but not on a computer and no store bought objects. You must create your giraffe(s) yourself! Click here to read why. So far I've got 80.401 giraffes, so I need 919.599 more! And I have 502 days left to get them.
Let's show Jørgen how amazing the internet is."

So, this is your opportunity to help show Jørgen, it can be done. The task is daunting however. One million drawings is a lot. At this point he needs an average of 1237 a day to reach his mark.So I encourage you to draw a giraffe today and send a picture of it to the link above.

Christopher, always up for the challenge submitted a drawing with four giraffes in it. I promise to do mine soon.
Posted by .Gord Hunter at 14:45 No comments: