This one fails the smell test too 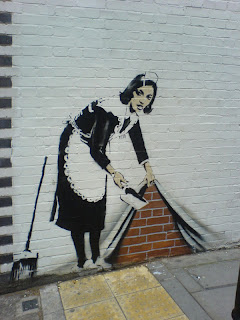 A good deal is being written these last couple of days about the new American documents being posted on WikiLeaks. They say a great deal about our Afghan war, how badly it is going, the relationship amongst the players and they give more detail about several situations than have here-to-date been released.

What many Americans have found the most troubling is that the documents show that their administration, particularly under George Bush, glossed over much of the detail and painted a picture much rosier than the reality. No real surprise there to us cynics.

The Canadian reaction to the leaks was initially a brush off saying that the documents were American and that they didn't concern Canada so "No comment".

Later in the day however the government was forced to response when journalists discovered that the documents reference four Canadian soldiers being killed by friendly fire in the form of heat seeking bombs guided by U.S. troops.

At the time the government said they had been killed by enemy fire. In fact Defence Minister Peter McKay still insists that is what happened. The Minister's spokesperson said yesterday "The loss of four Canadian soldiers on September 3, 2006, was the result of insurgent activity in the Panjwai district of Afghanistan."

I know that when you are trying to "sell" an unpopular war to the folks at home "killed by insurgents" goes down a lot better that "killed by our friends by mistake" but, I for one, prefer a little more honesty from my politicians.

Put to the smell test, this one fails. Ask yourself, why would an American military report claim responsibility for killing Canadian troops if it was the Taliban all along?

Ask yourself, can we trust anything Peter McKay has to say? McKay has proved himself less that trustworthy from the promise not to merge the PC Party with the Alliance, to his responses during the Afghan detainee debacle up to this week when he claims that the government  has "always been open and forthright".

A few thought about tenting 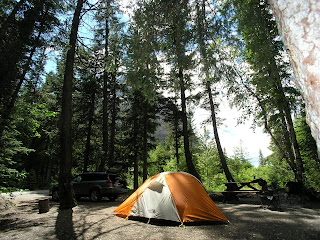 Well, I am back from my holiday although, being retired, I'm not sure what it was a holiday from. Perhaps from badminton, blogging and Bushwakkers.

It got me thinking about how much camping has changed for me, over the years. In the 1960's I can remember those old canvas tents that leaked in the rain and smelled musty all the time. We ate heavy breakfasts, bologna sandwiches for lunch and weiners and beans for supper. We also drank a lot of beer.

These days we mix it up. A few days camping balanced with a couple of days in a hotel. Our last evening in the tent we stayed at one of my favorite campsites in the National Park above Radium, B.C.

I had a nap in the afternoon while Shelley sat outside and read Ulysses.

We drove down to the hot spring early evening for a soak then made a supper of chicken breasts stuffed with mushrooms, freshly picked corn on the cob and new potatoes, washed down with a bottle of Quail's Gate Pinot Grigio.

A far cry from the old days, but better.
Posted by .Gord Hunter at 09:33 No comments: