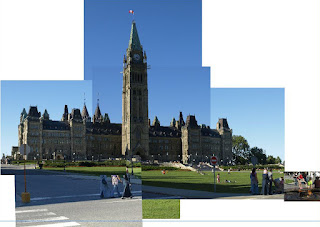 OK, I can't sit on my hands about this any longer. Even my family are on my case wondering why I haven't blogged about it.

The NDP's interim leader, Nycole Turmel was a member of the Bloc. So what. Canada's English language mainstream media are running with a story that doesn't deserve much more than a nod. The Globe &amp; Mail has their knickers in a knot and Christie Blachford, now writing for PostMedia, has worked herself into a lather about it.

It is no bloody wonder that Quebec feels a bit isolated from the rest of Canada. The Toronto based English media personify the cultural divide. They just doesn't get it and their ability to dismiss the Bloc as a one issue party baffles me. The Bloc's position in the House on most issues was very progressive and their commitment to enlightened social policy was commendable. A great many Quebecois supported them for that reason alone. After all, the Liberals blew it in Quebec with the sponsorship scandal, the Blue Meanies were just too far right and until this election, they just weren't sure about the NDP.

Now spurred on the the attention given to the matter by the media the political parties are in full flight and you have to wonder how they manage to dredge up the gall.

Politicians have switched parties like it was Canada's national sport.

So, no need for Stephen Harper to climb up on his sanctimonious high horse about it all. Come on Canada relax, it is August, we don't have the energy for all this crap.

Turmel is a placeholder leader until, either Jack comes back or perish the thought, can't return and has to be replaced. Putting a competent person into place who is not a contender for party leader, when and if that situation arises, was a very honourable thing to do. Lets respect his decision and get on with summer.

We are still driving the back roads of South Western Saskatchewan, in Grasslands National Park and area, seeking out bison, black tailed prairie dogs, rattlesnakes and burrowing owls with mixed success.

Not to many pictures to post at this point as I am shooting using the Olympus Raw Format and the small laptop computer I have with me won't edit them. I have to wait until I get home to use Photoshop.

My partner in crime and other ventures however has a better equipped laptop than I than I do and is wisely shooting in jpeg. She has some pics posted on her site.
Posted by .Gord Hunter at 16:56 No comments: