I have been sorting through old things of my mother's these last few days and found, folded  and tucked between pages of  her brother's old bible, this old photograph.

In the late 1950's the Progressive Conservative government of John Diefenbaker, acting in accordance with a clause in the NORAD agreement, deployed 56 American-made Bomarc missiles in Ontario and Quebec. Initially, the government did not see fit to tell the Canadian public that the intention was to fit the missiles  with nuclear warheads. This fact became known in 1960 causing quite a controversy.

My friend, Ivor Bigalow's parents were quite active in the Canadian Universities Campaign for Nuclear Disarmament. We were encouraged by them to get involved and we did. It was 1960 and I was 15.

I spent quite a bit of time getting signatures on a petition demanding that the Government refuse to allow these nuclear warheads onto Canadian soil. I went door to door and stood outside churches on Sunday morning asking people to sign our sheets. We gathered quite a lot signatures but in the process we got chased off a few church properties by priests

My mother's younger brother and favourite sibling was killed when his bomber crashed in Scotland while on a training mission in 1944. It was right after I was born. Mum was pretty much a pacifist after that so she was pretty cool with my involvement.

On the other hand, my father was a sergeant in the Canadian Army. He wasn't very encouraging.

That spring my buddy and I marched with other anti-nuc protesters in downtown Montreal and we managed to get our pictures in the newspaper. Even though my face was obscured by the guy in the balaclava, My Dad wasn't very pleased and it made for interesting supper time conversations.

Interesting to note that we won the day, if only temporarily. Under pressure from Canadians, Diefenbaker reneged on the deal with the Americans and blocked the installation of the warheads causing no end of tension between Canada and the USA. By 1963 the Liberal government under Mike Pearson bowed to pressure from the Americans and agreed to let the nuclear warheads in. 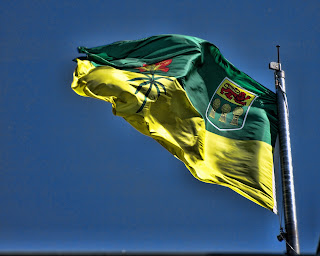 I will begrudgingly admit that Brad Wall impressed me with his performance during his victory speech Monday night. Like him or not, you have to admit he knows what to say and how to say it. With an engaging mix of Republican style family values and prairie humility, he had the crowd, and the Province, eating out of his hand. He played his audience like a pro.

The next day however, we saw another side of Brad Wall when he took a rather petulant shot across the bow of the trade union movement.

Wall complained that the SGEU had imposed an extra 1% dues increase on their members. The sole goal, he claims, being to defeat the Saskatchewan Party in the election. He said he was considering legislative changes, which would make it easier for union members to to better scrutinize how their unions dues are spent. Any changes the government intends to force on unions he said would be meant to provide greater transparency. "We're not going to be looking for arguments but if there's opportunities to increase accountability and transparency for union members we're going to pursue those,"

I thought the comments were interesting as he had already said that the members were told what the increase was going to be used for. No lack of transparency there.

It makes me wonder what Wall is up to. The Saskatchewan Party people really don’t understand trade unions. Being mostly small business people they have no experience with organized labour and have very little understanding of how they function. That bunch only know, they don’t like unions. No ands, ifs or buts.

When the Saskatchewan Party was first elected one of the first things on their plate was to pick a fight with organized labour. There was no reason for it except for a deep-seated visceral dislike for unions, particularly the SGEU.

The view, even within the Labour community, is that the SEGU leadership are not very likeable, they are not the sharpest tools in the shed and they can’t even get along with their own staff. The fact that the government doesn't like the union that represents the majority of their employees was no reason to bring in the punishing anti labour legislation, when a few tweaks would have solved the “problems.”

So what is next?

Wall wants changes in Labour legislation but will he stop a minor adjustments? History suggests not and he has already given us hints about where his thinking lies when he mused during the campaign that he might look at changing legislation so that dues would remain mandatory but unions would become responsible for collecting their own money.

The small business were all over that like a tent, the Canadian Federation of Independent Business spokesperson Marilyn Braun-Pollon, made it clear she and her members would support that. It is something they are already lobbying for. She said if unions had to collect their own dues, it might make them more accountable to their members.

Accountability is a good thing particularly at election time. I think everyone should remember it wasn’t the lack of trade union accountability that triggered the Global economic crisis.

So, stand by, yesterday was just a glimpse of the real Brad Wall.
Posted by .Gord Hunter at 09:44 No comments:

I spent yesterday afternoon and evening working in a poll house trying to hustle up votes for Sandra Morin, making sure known NDP supporters got out to vote.

We all knew the New Democrats were going to take a drubbing but, we didn't think it was going to be as bad as it was.

Sandra lost her seat along with some other very good people. The challenge is to find the silver lining in all this.

The decision to elect Duane Lingenfelter to replace Lorne Calvert as party leader was a bad one. It was driven by the wrong headed dinosaurs  who still populate the NDP back rooms. They rejected the new blood who could rebuild the party and instead chose to remain with their feet firmly planted in the past. People who did nothing but bad mouth Lingenfelter as he left the party and moved to Alberta'a oil industry, supported his leadership just because he was a link to what they saw as, the good old days.

Now, the NDP will have to give the newer, brighter and younger MLAs, Trent Wotherspoon, Warren McCall, Cam Broten and Danielle Chartier a chance to lead and to rebuild. They have their work cut out for them but, I think they are up to the task at hand.

The Saskatchewan Party may have 49 seats but, most of them are lightweights who simply rode the green wave. Let's be honest, not many are Cabinet material.

It will be another interesting four years.
Posted by .Gord Hunter at 22:14 No comments: