Across Canada on a Unicycle 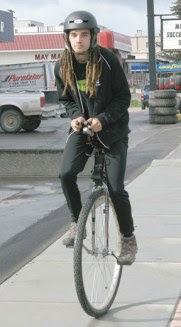 A few weeks back while on my way to Vancouver, heading down hill from Manning Park, I blogged about seeing a unicyclist heading up. It seemed like an impossible task but, there he was with a backpack on his back, pedaling up that hill. It was an amazing sight.

I wanted to stop and get a photo but traffic was tight behind me and there was really no place to turn around so a few km down the road I gave up the idea and continued west. (Just for the record I swiped the photo to the left from Philip's website)

I thought he was just another eccentric, half mad westcoaster, but it seems I was wrong. Philip Schleihauf is from Ottawa and is riding his unicycle 5000 km across Canada from town to town camping, couch surfing and resting in hostels while he spreads awareness and raises money for Invisible Children.

Invisible Children is an organization dedicated to helping end the longest running war in Africa. Their main focus is freeing the child soldiers who make up 90% of the Lord's Resistance Army (LRA). These kids are abducted by the army at a young age and are forced to observe, endure, and commit acts of unimaginable violence. Philip is accepting donations to help with the overhead costs of the trip. All proceeds will go to the Invisible Children organization.

He has a website which he is updating as he goes. This is one tough kid and a great cause. I will make a donation and hope you will too.

Amazingly, there seem to be two people unicycling across Canada right now. The other guy, Dave Cox seems to be doing the trek to promote unicycles.

It is spring but it sure ain't summer.

It continues to be a funny spring. We think it has really arrived and then it dips to zero, or below. Or, perhaps it is always like this. We are all so fed up with the cold we just really want it to be warm.

A great deal of it is fed by the garden stores that bring in truck loads of herbs, flowers and tomatoes that subsequently freeze in people's gardens.

I am not sure if that is a statement about optimism or greed.

No matter what I have some herbs in, a few onions are trying hard to poke up through the soil and we have a few things we are still putting out during the day and bringing back in in the evening.

Before I moved to Saskatchewan I always thought that after the long May weekend gardeners were safe. I've learned better.
Posted by .Gord Hunter at 19:43 No comments: