I Think They Have Lost Their Minds 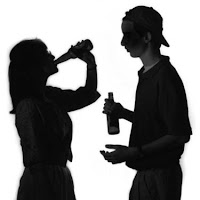 Here in Saskatchewan it wasn't First Nations unemployment, the lack of adequate housing, sky rocketing rental costs, or the economic disparity many of us see in this new "boom economy" that was the hot button issue. The thing that captured the hearts and minds of delegates at the governing party's Convention was lowering the drinking age from 19 to 18.

First the slightly older guys whose friends are not yet 19 think it would make it a lot easier to get them drunk if they could all go to the bar.

And secondly, bar owners who see lowering the drinking age to 18, as a cash grab. Great for business. Cooler sales shoot through the roof.

The Sask Party Government loves small business so will most likely back this initiative. We have heard the "What is good for business is good for Saskatchewan." mantra all too often

Tourism Saskatchewan will most likely jump on the bandwagon too selling this initiative as a way to increase tourism. Lets' attract under aged American drinkers to small Saskatchewan border town bars. Yet another  wayto stimulate the rural Saskatchewan economy.
Posted by .Gord Hunter at 11:43 No comments:

Why Would we Believe Anything they Say?

The immigration minister Jason Kenney is hell bent for leather to deport a couple of Nigerian, University of Regina students. Victoria Ordu and Ihuoma Amadi made an honest mistake and worked for a couple of weeks at a Walmart store in violation of their student visas.

Many people are outraged by the actions of Canadian Immigration Services. Kenny and Cabinet puppet Vic Toews both have lied to the public about the matter saying the students were not actually enrolled in university. Something the U of R refutes. Both have been enrolled since 2009.

Both students, here on scholarships, have had to take refuge in a church to keep from being forcibly being put onto an airplane back to Africa.

Not surprisingly, there is no indication that any managers of the huge America company that hired them have had to take refuge in a church or anywhere else, to avoid deportation for hiring illegal aliens.

As often happens with Harper and his gang of thugs, we are getting mixed signals from this Government. At the same time he is trying to deport these young women the Minister is trying to amend legislation to make it easier for foreign students to stay here in Canada after they complete their studies. To be able to apply to immigrate from right here in Canada instead of having to first, return home.

Canada recruits foreign students. They pay a great deal more that Canadians students do for tuition. In many ways, a foreign student is basically, a cash cow for universities.

It is worth noting that many, many of these students the minister is trying to entice are here on scholarships paid by their home countries, often developing nations, that cannot afford to lose their best and brightest.

At the same time, Canada is continuing to under fund the education system in our own country. As an example, it is cheaper to steal doctors from developing nations than it is to provide more spaces for Canadian students in medical school.