The Globe & Mail’s John Doyle is certainly one of my favourite entertainment writers. I seldom miss what he has to say about the television industry, even if I don’t watch a great deal of television.

Today he writes about a small hornet’s nest stirred up by Michel Arpin, the Vice Chair of the Canadian-Radio and Telecommunications Commission, the CRTC. Mr Arpin admitted in a year-end interview with Playback magazine that he pretty much only watches news and documentary programs. He said, “I’m not that interested in televised fiction or even feature films.”

Those comments, made by others might not mean much but, as John Doyle points out, Arpin has been one of the most influential people at the CRTC helping to decide how much drama and comedy has to be produced and aired on Canadian television.

Denis McGrath, a television writer, is outraged by Arpin’s statements and writes on his blog “I've see Arpin in action at CRTC hearings. All pursed lips and bristling skepticism, I saw him treat what he calls "the unions" with the air of an impatient parent hearing out the teenagers on the some newfangled trend in music or technology.”

There is no doubt that McGrath’s outrage is well placed but, from my perspective, why the surprise? Arpin is just one of a long line of CRTC board members who act much more like industry toadies than servants of the people, trying to serve the Canadian public. I have spent more time at the CRTC than I ever care to remember. The CRTC has failed Canadians year, after year, after year. At licence renewal time the television networks, time after time roll out flashy presentation, full of promise. Time after time they break those promises, once the renewal is granted.

The CRTC allowed the networks to starve their local stations for resources, drop almost all local programming, cut local news coverage back to next to nothing and reduce journalistic standards substantially. They have allowed the major networks to feed Canadians, crappy foreign programming in prime time and to pay little more than lip service to the Canadian Television production industry.

The airwaves belong to the Canadians people, not the industry. That statement should be predominant on the CRTC’s letter head. Unfortunately they forgot that fact, years ago.

Just to follow up on my earlier blog about the greed in the potash industry, Canadian Press reports that the “Potash Corp. of Saskatchewan said Thursday an ongoing demand for fertilizer helped triple its full-year earnings and pushed fourth-quarter profits to twice year-earlier levels.

The Saskatoon-based company recorded earnings of $3.5-billion or $11.01 per share for fiscal 2008, more than three times higher than 2007 profits of $1.1-billion or $3.40 per share.”
It is worth noting that PCS, a month ago gave layoff notice to 940 employees who expect to be off work for eight weeks or so. Mosaic, the other big Potash player in Saskatchewan you will remember, did the same.

Whatever happened to the time where employees were valued and kept on during slow periods as a reward for their role in making their employers so profitable? Many in Saskatchewan are asking is there really a real need for a slowdown at all or, is the industry just reducing supply to keep prices high?

At a time when we are all digging in for the global economic slowdown which seems to have been caused by corporate greed, mismanagement and downright dishonesty it is important to take a look at how our corporate citizens do business.

I for one am amazed that Premier Brad Wall, always so quick to criticize Labour, has had nothing to say about these corporate gymnastics. What is that saying? “He who pays the piper...” oh, never mind.
Posted by .Gord Hunter at 08:49 No comments: 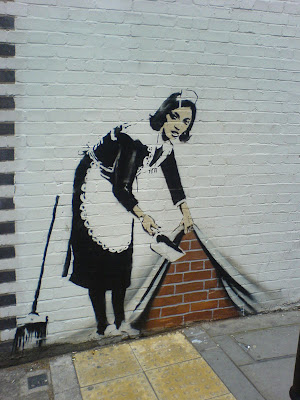 I thought I'd try to move away from some of the political commentary and share this with you. After all who needs another "impressions of the inauguration" blog posting. Truth be told I didn't watch it.

When we were in London last year I first became aware of an anonymous but amazing street artist who calls himself Banksy. Most of his work is on old, abandoned buildings but some are tucked here and there in corners where you might miss them if you weren't looking carefully.

The Tate Modern bookstore had an art book featuring his work, which is hard to find. The City of London considers him a graffiti artist and covers his work up, when they become aware of it. He has nevertheless become somewhat of a cult hero and has developed a huge international following. Photos of his work are quite prevalent on the web.

While we were in London he sponsored a show featuring his own work and that of other famous street artists. It was held in an unused train tunnel attached to London's Waterloo Station. The line ups were blocks long. Thousands of people waited hours, on the street, in an unusually warm summer day to see his work.

Do yourself a favour and Google "Banksy." I hope you like his images as much as I do.

"I'll be long gone before some smart person ever figures out what happened inside this Oval Office."
Washington DC, 12 May, 2008
Posted by .Gord Hunter at 08:05 No comments: