How do you like those corporate tax cuts so far, Jim? 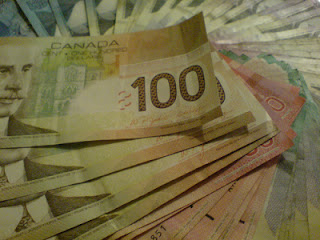 Stephen Harper and his blue meanies tell us they have the economy in hand. Don't forget, Canada's Action Plan saved us from the kind of problems experienced by Greece and Spain. Stephen reminds us that we are really lucky that socialist Tom Mulcair isn't running things .

Our Prime Minister is so proud of his record he took it upon himself to lecture other world leaders about the strength of his economic policies. Praise the Lord, Harper has saved us all from a fate worse than death.

At least that is what the Conservatives like to tell us.

That is why I am simply amazed that this story, I found tucked away on the back pages of the Regina Leader Post, isn't front page news. How could it not be?

Ottawa's deficit for the current fiscal year is now $6.2 billion. I guess that in and of itself, really doesn't grab people's attention. We are getting used to surging deficits despite the soothing tone of political leaders who tell us "We are fine."

The real story is that $6.2 billion is pretty much double what it was at the end of the previous month.

The Finance Department quietly announced recently that the August deficit was $3.2 billion, slightly more than the $3.1 billion recorded in the same month of 2011 but, corporate tax revenues fell by 13.5 per cent decline compared with August 2011 and a 16 per cent decline from $2.1 billion in July of this year.

Finance Minister Jim Flaherty, who said recently he may need to revise downward growth projections for the rest of the year, is due to issue a midterm report card on the government's books in a few weeks.

How are those corporate tax cuts working out for out so far Jim? I can just hear him saying, "Oh don't worry, the middle class will pick up the slack"

Oh by the way, personal income tax receipts are up 3.8 per cent for the year so far.
Posted by .Gord Hunter at 18:16 No comments: