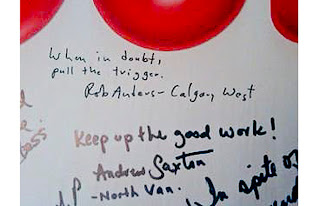 I swear Ottawa gets weirder by the minute.

An obscure Christian group, El Shafie Ministries, got permission from Harper and his gang to put an oversized "Support Our Troops" card in the House of Commons. The group lobbied for MPs to sign in the card Ottawa That creates a bit if a quandary for MPs, if they don't sign the card Stevie's Storm Troopers are bound to suggest that they are cavorting with the enemy or something else as ridiculous. We all remember the “Taliban Jack” comments.

Most MPs left notes like, "You are the Best" or "We are all proud of the work you do" but not to be undone Calgary West Reform/ Alliance/Conservative Member of Parliament Rob Anders' note says "When in doubt, pull the trigger."

Anders admits he left the message on the card, suggesting that "it's a common military expression" that isn't meant to alarm anyone." "It's just another way of saying keep safe and defend yourself," he told the Calgary Herald. He thinks the issue is being overblown by detractors.

Opposition MPs are outraged but we haven't heard much from the PM on the issue which would imply that Harper quietly supports the sentiment. No surprise there.

Meanwhile, interestingly enough, the El Shafie Ministries website has pulled all but their first page from their website. One has to wonder who the hell they really are anyway.