What about an Order of Canada 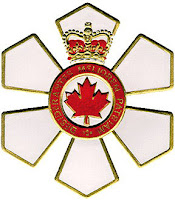 Another story that grabbed my attention because of the outrage expressed by the media. Saskatchewan Conservative MP Maurice Vellacott, generously gave Queen's Diamond Jubilee medals to two anti-abortion activists who have been jailed repeatedly.

One of the 30 medals Vellacott was allotted to give away as a Conservative backbencher, one went to someone called Mary Wagner, whose actions at abortion clinics have landed her behind bars time and time again. He also gave one to Linda Gibbons,who is currently in jail in Toronto awaiting trial after she attempted to force her way into a Toronto clinic’s private treatment area.

Should we be giving these things to criminals? Do we care? What if the shoe was on the other foot?

Although I have never been convicted of a crime I have had my share of confrontations with police and have been arrested, and jailed as a result of my actions on picket lines. Should I now be disqualified?

Thinking of the issue in that light I am not so sure. I have been an activist too.

* Just a quick note to my MP Tom Lukiwski: I am still waiting for my medal in recognition of a lifetime working in the trenches fighting for the rights of working peoples.
OK Tom,  you were probably right in not offering me that one. A medal from the Queen wouldn't really be appropriate for me but, all things considered, I would accept an Order of Canada.
And after all if Conrad Black still has his and...never mind, I feel a rant coming on. I should just quit.
Posted by .Gord Hunter at 11:29