If you like Gerry Ritz, you'll love Vic Teows. They are pretty much peas in a pod sitting in the front benches along with the rest of Steven Harper's brain trust. Teows who worked hard to trash the gun registry is another of those Conservative bully boys who walks over anyone who disagrees with him or his ideas. 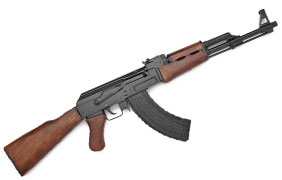 A sulking, smirking Toews has reluctantly announced that Effective Dec. 1, rules which the Harper Conservatives have delayed almost eight years, rules which will requiring serial numbers on gun will come into force.

In effect, serial numbers on rifles will work like a licence plate or VIN number. Now, investigators will be able to determine where and when the gun was made, and when it was imported to Canada, but not much more.

The rules, which the government says will "contribute to public safety, by facilitating law enforcement investigations when the markings can be linked to information on the last legal owner of the firearm."

I am not so sure, last June, the Tories also introduced legislation to ensure gun dealers don't have to keep records identifying buyers of non-restricted weapons and unfortunately, unlike the original 2004 regulations which were been postponed several times by this Conservative government, these rules will not be enforced and there are no penalties for non-complience.

How cynical can you get. What contempt for international protocols these guys have.