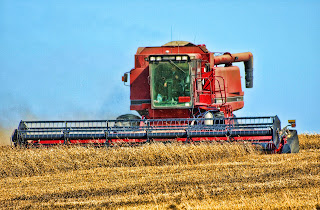 The Harper Conservatives made it very clear. Give them a majority, and the Wheat Board's monopoly as a single desk seller for wheat and barley would fade into history. Notwithstanding that, and with typical rural tunnel vision the farm communities pretty much voted as a block for the blue meanies.

Why the surprise then that Harper plans to follow through with his promise to "Give farmers the choice."

Former ostrich farmer, now Agriculture Minister, Gerry Ritz, or as he is fondly known, the Ritz Cracker, is once again carrying the torch for Harper on this issue. I heard him yesterday going on and on about democracy and how they won a majority so clearly Canadians support dismantling single desk selling. That is the democratic process he was saying.

Gerry however doesn't give any credence to the very direct democratic vote undertaken by farmers who actually use the Wheat Board. Given the opportunity to vote on the issue 400,000 farmers cast their ballots  in favor of keeping the single desk. That overwhelming support for the Wheat Board doesn't mean a lick to Gerry. "Our government is committed to giving Western Canadian wheat farmers the marketing freedom they want and deserve" he said while questioning the legitimacy of the plebiscite.

The Wheat Board might not work for farmers close to the American market with low transportation costs but doing away to a cooperative approach to marketing, without question, will slam most farmers hard in the pocket book. You have to ask then, what were they thinking? Those agricultural communities were once the backbone of the New Democrats out here but, corporate farms brings big business thinking. It is everyone for themselves.

The one thing Gerry Ritz and I can probably agree on is "They were warned.". Harper and his cronies made it pretty clear. Did those farmers give a moment's thought about the consequences when they cast their ballots in the last election? My sense is they voted for doing away with the gun registry without thinking about the Wheat Board.