Oh Joy, mail from my MP and my MLA today

Today’s mail brought me material from both my MLA and my federal MP. 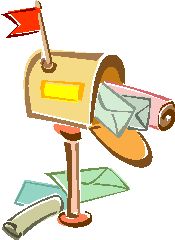 To be honest I don’t get all that much mail from my MLA Sandra Morin so I was interested in what she had to say.  This is an election year in Saskatchewan and the prospect of facing the voters when your party leader  hasn’t yet taken the hint that he has to move on, must be a little daunting for her. I like Sandra and wish her luck.
Sandra is the Environment critic and  tells us that “In this spring Session beginning in March, I plan to introduce a private members bill to protect Saskatchewan Residents against oil sands toxins coming from Alberta.”
Well, I am sorry Sandra but, how the hell do you actually do that? Build a wall? Install big fans to work against the prevailing westerly’s?  That is one piece of legislation I’ll be keeping my eye out for.
On the other hand,  I get lots of mail from my MP, Tom Lukiwski. Tom is a classic Conservative postal spammer.
This week, as his party is about to risk being defeated in an effort to introduce tax cuts for corporate Canada, Tom-Boy is trying to convince me that “Our Conservative government has cut taxes more than 100 times since 2006 to help the typical Canadian family save $3000.00 every year.”
I have news for you Tom. Someone must have got my three grand because my taxes sure didn’t go down.  I don’t buy it.
Tom, who is pretty much useless and a mouthpiece for Stephen Harper must be a little worried this time around. He all but disappeared during the BHP potash debate and he has been pretty sparse with his support for the proposed new stadium here in Regina.
It was noticed.
I for one don’t want to see money spent on a new stadium but it is a big deal out here in “Rider Nation”. Tom’s lack of support has hit a chord with some of the red neck crowd. A friend sent me some posts from a talk radio site. Reading these I’d say Tom must be getting a bit edgy.
Baker58
I am very disappointed to say that I am going to change who I vote for in the next election. At least by voting for an opposition party they will make noise. Tom Lukiwski is in my riding and I have written a few emails to him and all I have received back is a prepared statement from some intern and a christmas card. Through this debate and through Potash Corp our representation has been a complete joke. I would rather have a guy who maybe I don't see eye to eye with all the time who will make some noise rather than some puppet who has to ask Harper which hand to wipe his *** with.

Lore
What were you expecting him to say? We all know that Conservative MPs aren't allowed to say anything unless Harper has his hand up their butt so they move their lips properly when Harper's voice comes out.

fergyrocks
13 MPs and what does it get you? Nothing. Screwed on equalization, and the stadium deal. I think these will be big issues in SK during the next election.

rider89ers
have to boot out Andrew Scheer, i heard he was one hell of a waiter before he got his great silent backbencher gig
Should be an interesting election  assuming the Liberals and the NDP don't chicken out again
.
Posted by .Gord Hunter at 13:00