The Minister of Weasel Words 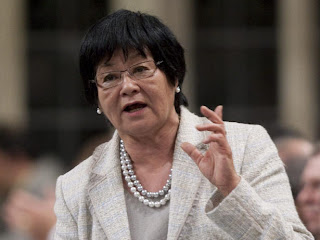 We could hardly call Bev Oda forthcoming. With steps that would Ginger Rogers envious we have watched Oda danced around the issue for weeks now. In fact. it took the Minister of International Cooperation, 14 weeks to finally tell a Commons committee who altered the infamous memo denying $7-million of funding to human rights group Kairos. The New Democrts call her The Minister of Weasel words" and subjected her to some very tough grilling about the whole matter.


It looked like her actions might bring the government down but "tough on crime" beat her to it. The Parliamentary Committee looking into the the lack of transparency around that issue has found the Government in contempt of Parliament earlier today.
Unless the big talkers chicken out again, we just may be on our way to the polls by the end of the week.
If you are following the Oda story though, the Hill Times takes a good look at the "not" scandal in this week's edition.