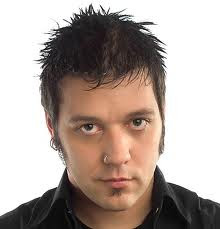 
Take a look. (Stephen Harper: “. . . we will continue our efforts until this registry is finally abolished.”)


Here’s what I just don’t understand. And you can help me through this. Does the Prime Minister think it’s not a democracy if he doesn’t win?  ‘Cause MPs represent people. So we have to assume that they voted for their constituents. In fact we know that a lot of MPs went against their own personal beliefs to represent their constituents. So in a sense Canadians have spoken.


But Mr. Harper . . . if you think the system isn’t fair – I’m with you. So why don’t we change it. How about proportional representation, where every vote actually counts.”
I know George probably doesn't consider himself main stream so "I am sorry for suggesting you are George but "Way to go  buddy!"
Check George out at http://www.cbc.ca/strombo/videos.html?ID=1599034077  or go to
Fair Vote Canada
Posted by .Gord Hunter at 14:16 No comments:

Can We Trust This Guy? 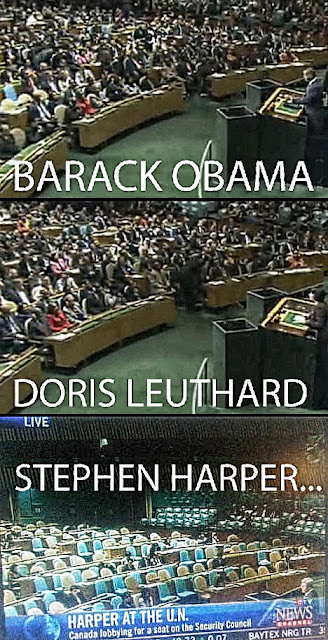 Well, after missing his opportunity to address the United Nations last year, in lieu of a double double and a tour of an Ontario Tim Horton's plant Prime Minister Stephen Harper agreed this week to grace the body with his presence. Contrary to all the spin at home, the delegates were less than impressed.


They packed the house for Obama - no real surprise there- and for Doris Leuthard   a Swiss politician and   member of the Swiss Federal Council and head of their Federal Department of Economic Affairs but when Harper's turn to speak came up, the place emptied out. Not a good sign for a leader trying to hustle a seat on the Security Council.

Despite his past criticism of the international body and working multilaterally in general, he praised the UN's record. I thought Harper spoke well and said a number of things which rang true for me. He cited the United Nations for their good work, recognized Canada's contribution to the body over several decades and praised Canada's traditional multilateral approach.

The problem is, I just don't trust the guy. He is a shrewd politician. His record clashes with his rhetoric.

Most UN delegates either went for an early lunch or some say, they boycotted Harper's speech. No doubt they have been watching Canada's less than stellar performance internationally.  Actions speak louder than words and no doubt the greatest stumbling block to winning the seat is Harper's record. So who knows?


To be honest I am not sure I want our country to sit on the Security Council under this Conservative government.  It saves the embarrassment later on.
Posted by .Gord Hunter at 11:22 1 comment:

What About Private Citizens P-3's

Well the concept of a new stadium for Regina is in the news again today.

The new catch phrase for Ken Cheveldayoff, the Minister responsible for trying to get this project off the ground is P-3. Nothing new about P-3's, right wing governments love them. Public-Private-Partnership, it has a kind of ring to it doesn't it.

The way it goes with this Regina Stadium project is that there are supposedly five partners working together trying to get things off the ground.

With the inevitable cost overruns this stadium will cost at least $500,000,000. Since the football team  doesn't have an extra $100,000,000 we just have to assume their contribution will be smaller so each of the other partners will have to come up with over $100,000,000.
So despite the unlikely odds,  lets just pretend that happens. Then the question is who will own the place when we are all done? Well, the private sector of course. The minister as much as admitted it yesterday saying "If somebody came in and said they wanted to own it and operate it, that's something we would look at very favourably..."
For the private sector's perspective there is real beauty in the P-3.  They put up a fraction of the costs, they agree to run the place and are generally given guaranteed profits, they assume ownership and if they screw it up the public are their to bail them out. A hell of a deal. This is the new Saskatchewan entrepreneurial spirit. It is the kind of thing that makes Enterprise Saskatchewan wet their pants.
I'm not so sure. I am holding out for private citizen P-3s. Just imagine. I always wanted a Beamer. So if I put down $20,000 using P-3 logic the other partners could put up the rest of the $100,000 cost for a Series 6 BMW. The provincial and civic governments would waive the licencing fees and give me tax credits because of my strong contribution to the local economy.
The more I think about it, the more this free enterprise model grows on me. Bring it on.
Posted by .Gord Hunter at 10:49 No comments:

Do You Think Defeating the Bill Will Shut Them Up 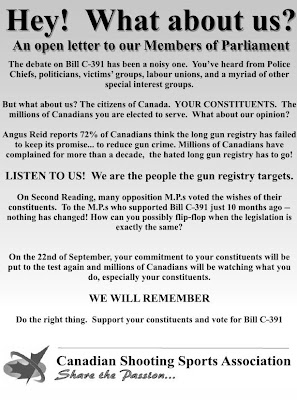 Well the bill to scrap the gun registry is almost dead. Finally.

It has been a long infuriating summer's debate. E-mails, call-in shows, newspaper ads, commentary, chest thumping election style speeches - we had it all.  Perhaps the NRA wasn't involved but their spirit was ever present. Again and again the gun owners claimed, "The next thing is the police will take my guns away." Farmers talked about "The right to brae arms." What bull.

Those Conservative MP's claim the Liberals and the NDP are out to get hunters and farmers. What a crock.

Very few Canadians have any problem with hunters bagging the add deer or farmers shooting gophers but I must tell you that some of the pro-gun bumper stickers out here in Western Canada make me nervous. Who are my neighbours anyway?

We have to ask ourselves, who benefited from all this rhetoric.  No one really except perhaps the spin doctors, the big advertising firms, the pollsters and newspaper industry.  The ad on the right is a prime example. It ran, full page in Ottawa's Hill Times. Two days before the vote that, it has already been determined, will fail.

The ad says that ordinary citizens were not consulted and implies that if they were listened to, the gun registry would be on its was out.

I agree that many, many Canadian citizens were not listened to. I agree, but not in the same way the ad implies. My MP, Ton "A Team' Lukewski didn't listen to my support for the gun registry nor did any of the other Conservative MP's I wrote to.

What the ad really does is threaten. "WE WILL REMEMBER" it says. And, it implies, "If you don't vote to support the bill, we'll take you out next election.

Lets not go half way here. Let's just get it over with and call an election.
Posted by .Gord Hunter at 09:51 No comments:

We all find wild and wonderful things on the web and by taking a look at my in box I would guess that many of us feel compelled to share those things with everyone on their e-mail list. I generally don't do that. In fact it is usually annoying.

From time to time I can't help myself. Thanks to the Globe & Mail's Ivor Tossel this is one of those mornings.

Try www.TheWildernessDowntown.com It is delightful.

They say it works best using Google Chrome and it needs a good processor but there is no doubt it is fun.

When you are done, draw and send a postcard.
Posted by .Gord Hunter at 09:52 No comments: