Are you fed up with the State of our Democracy?

At the risk of overstating what Canadians think, it is clear to me that most of us are fed up with the state of democracy in Canada. If I have overstated it, I know that at the very least most of my friends are.

On September 23, Maclean's and CPAC hosted a round table discussion entitled our “Democracy is Broken: How do we fix it?” at Toronto's St Lawrence Centre for the Arts.

The round table was moderated by Peter Van Dusen and featured Maclean’s Andrew Coyne and Paul Wells. They were joined by a guest panel made up of former NDP leader Ed Broadbent, former prime minister's chief of staff Eddie Goldenberg, author John Ralston Saul and conservative commentator Rick Anderson.

It was an interesting discussion, a must for political junkies.

It was turned into a television program and you can find it by following this link to CPAC.

Earlier this week, Sunday Edition's Michael Enright moderated a public forum entitled "Canada's Dysfunctional Politics", is There a Cure For Our Failing Democracy" . Sunday Edition hosted the town hall type meeting at St. Paul's University in Ottawa to discuss the issues. It was broadcast September 27 and will soon be available on podcast.

Jane Taber ,senior parliamentary writer for The Globe and Mail, and co-host of CTV's Question Period.

.Charlotte Gray, is one of Canada's best known non fiction writers, and adjunct professor in the department of history at Carlton University.

William Johnson, the author of five books on politics in French and English including "The Future of Canada" and a biography of Stephen Harper.

As well on September 27, on CPAC's Goldhawk Live, the topic is Dysfunctional Democracy. They will be taking live calls from viewers. Political scientist and media commentator John Trent, who is on FVC's National Advisory Board, will be a studio guest.

The program should also be available on-line at the CPAC site if you miss it.

What is it about Dilbert?

We live in a world where business and business leader rank far above the rest of us. They are courted by politicians, so their opinions can be sought out before government leaders make any significant decisions. These new sages have garnered respect from the ruling classes far above what they deserve. The economic meltdown proved that.

So, before we all bow down to the gods of big business I think we have to take a few minutes and ask ourselves why the Dilbert comic strip resonates with so many of us.
Posted by .Gord Hunter at 12:08 No comments:

What About This Election Idea? 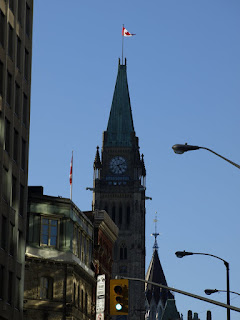 As election talk increases our newspapers are full of opinions by political pundits telling us that Canadians don’t want an election. They think that Ottawa should simply get down to work even if it means letting Little Stevie run roughshod over our already bruised Canadian psyche.

As much as Stephen Harper drones on about his legitimately elected government, only about 30% of Canadians voted for those guys in the last election. A majority of Canadians don’t want this Harper government in power. That much has been clear from the outset.

I used to support the idea of minority governments. Historically, they have worked but in this age of fuck you politics, they are an appalling failure.

So ask yourself, what have we got?

The result is that as a people, Canadians who have a reputation for finding the workable compromise, are being led by a “my way or the highway” government. It is a situation few of us are comfortable with.

The real question is do we want to exchange a Conservative lead government for Liberal government with the same lackluster support now held by Harper and his gang? Why bother.

In the short term what we need is a real coalition government that can team up together and make parliament work. Not some temporary soft Conservative/Bloc/NDP coalition like we are working with now in the short term, but a formal Liberal/NDP deal. Any reasonable government with a social conscious would be supported by the Bloc. A good coalition would easily go full term.

The only thing standing in the way of that happening is hubris and there are few things more powerful.

In the long term, Canadians have to begin to realize that democracy as we know it in this country is a sham.

We need to change the electoral system.

So, wake up Canada and reclaim your country while you can still recognize it.