Brad Should Think About the Kids

The Wall government has themselves in a bit of a jam these days. They have only themselves to blame.

First, Wall thought he was pretty smart when he had his people sidle up to the nurses in 2008 and slip them a 35% increase in wages. The move by Brad and the nurses threw a wrench into the works and undermined any efforts to build real collective action against the Government's hold the line bargaining. He out smarted most of the union side negotiators who thought they could wrestle something close to the same money for their members. They couldn't but, by the time they realized that, all the wind went out of the common front's sails.

Labour might not have won that round but, to their credit they have long memories.

The second thing that undermined Wall's bargaining position was his own love of the spotlight and his unchecked boosterism.

Wall is a born salesman. He should be selling vinyl siding. He even convinced the Globe & Mail that he was Prime Ministerial material.

Brad Wall has spent the last year telling all of us here in flat city and beyond, that now that the evil, job killing, small business hating, socialist leaning NDP have been dispatched, Saskatchewan is booming.

Not so fast Brad.

During the tough times Saskatchewan workers, particularly Saskatchewan government workers were pressed to take less. The government, a generally labour friendly government, convinced workers to take less that they deserved because "the money just isn't there." Labour grudgingly took one for the team to try and keep things on an even keel.

So now the consummate showman is in a jam. How can he continue to say;


after he and his cronies have made so much out of the Saskaboom?

I for one am happy to sit this one out and watch Brad squirm.
Posted by .Gord Hunter at 11:02 No comments:

And in the News Today

Well the rapture has come and gone and I haven't noticed anyone missing in action from the Harper crew. 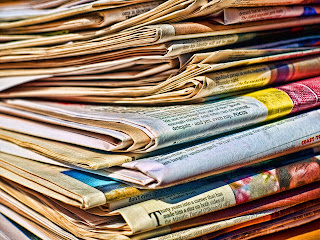 We heard a lot of good news about our economy from the Blue Meanies during the election. We were told, things are good, all thanks to Stephen Harper’s fiscal policies apparently, but flying in the face of that optimistic vision, a new Salvation Army report found that a surprising amount of Canadians have first-hand knowledge of being homeless or in need of outside help to stay afloat. Almost 25 per cent of Canadians have had to depend on services such as food banks and/or other charitable groups during their lives. Seven per cent of Canadians reported they had to sleep on the street or in a homeless shelter due to unavailable housing.

The report entitled Canada Speaks, found there was a clear division in the attitudes toward Canada's homeless population, with more than half of those polled feeling that any money given directly to those on the street would do more harm than good. Despite what the new data shows, about 40 per cent of people cited in the report believe Canada's homeless population choose to live on the street or in shelters,

Curiously, that figure just about matches the percentage of people who voted Conservative in the last election. Humm....

Harper not so Tough on White Collar crime
Stephen Harper may talk about his “tough on crime” agenda on the campaign trail, vowing to lock up criminals and throw away the key. He never has much to say about fighting the root cause of much of the low end criminality - poverty.

At the other end of the criminal spectrum Harper seems to have taken a hand off approach.

In an international report that points the finger at Prime Minister Stephen Harper's lack of commitment Canada has been singled out for failing to enforce anti-bribery rules abroad. The watchdog group Transparency International said this week "Canada is the only G7 country in the little or no enforcement category, and has been in this category since the first edition of this report in 2005.” The agency groups Canada with other laggards such as Bulgaria, Estonia, Greece and Slovenia.

In the past decade, only a single Canadian company has ever been convicted of foreign bribery and the $25,000 fine issued by the court was less than the bribe involved.

Canada is also one of a handful of nine countries that explicitly permits so-called “facilitation payments” to foreign officials for acts of a “routine nature” that may be part of their jobs.

Fraser's Good Work Noticed
Most of us political watchers eagerly await any report put together by Auditor General Shelia Fraser and her crew. She has a nose for screw ups and stuffed shirts like Tony Clement just hate her. She may not be a favourite with the Harper gang but thanks to WikiLeaks, we know that the United States government is was paying attention and was impressed with her work. Leaked, confidential diplomatic cables tell us that the U.S. nominated Fraser as their choice to run the United Nations Office of Internal Oversight Services, but she declined.

Apparently there is still a awful lot of work yet to do here in Canada.

The Gall of Some People
After a stinging rebuke following the U.S. President’s urging that Israel return to something that at least resembles the 1967 borders in an effort to get real progress in Israeli-Palestinian peace talks, Benjamin Netanyahu, Prime Minister of Israel, told the United States Congress this week that the Jewish state does not need America’s military help to protect his country. The PM says Israel can protect itself.

What he didn’t say was that Israel would foot the bill for that protection themselves.

His speech to the U.S. Congress was designed to build support for President Obama's request for further $3 billion in military aid to Israel in the 2011 budget. Obama made the request despite Netanyahu’s rejection of his new road map for peace in the Middle East.

While he U.S Government gives the Palestinian Authority less than $500 million per year.On average the American people send Israel nearly $2 billion per year, most of it in military aid. Since 2008, the annual amount of U.S. financial support to Israel has increased to more than $3 billion per year.

Apparently, He who pays the piper calls the tune is not a popular saying in Israel.
Posted by .Gord Hunter at 11:03 No comments: