Things Are Looking up for Dope Smokers in Atlantic Canada

It is tough sledding for you graduates looking for meaningful work and its going to be a tough summer for University students looking for jobs.

Not so long ago when people were grabbing at early retirement packages and the governments were talking about jobs for new and creative young workers prospects looked good for high school grads entering university. Everything was coming up roses.

Today the Blue Meanies have shifted their stance. Today it is screw young workers, make people work longer, no access to Old Age Security until 67 and take a hands off approach while corporations default on workers' pensions.

It is hard to get a handle on it because instead of just being up front about it all, they pretend they are doing  a great job for Canadians with warm and fuzzy messaging, while all the while they are, day by day announcing job and program cuts.

Wait! Stop! Tell me it ain't so. The law and order government that wants to bring in mandatory jail sentences for the heinous crime of growing five or more marijuana plants. The government that along with the crazy Americans just told the rest of the hemisphere to pound sand when they suggested that drug laws were not working and should be relaxed, wants to make it easier to bring drugs into Canada.

A Week in the Life Under Harper 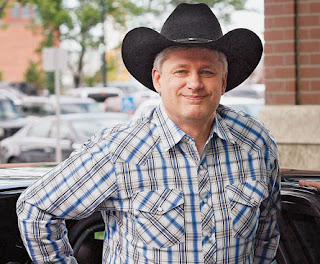 If nothing else give us pause, the cuts to services being dribbled out to the public day by day, the result of the cuts in the Harper budget, should.

I'm not going to go into detail ad nauseum but, if Stevie hadn't reduced the GST and cut corporate taxes, there wouldn't be a deficit.

The first one that sticks its head up is the cut to a program which provided internet services through libraries and community centres. A service used by seniors and under privileged people who either don't have or can't afford a computer. The program costs peanuts in the larger scheme of things.

We all should remember the Food Inspection Agency. The last time we heard from them was when 33 Canadians died as a result of the infamous Maple Leaf listeria crisis. At the time it was suggested that inspectors were not able to spend time of the meat packing floor under Harper and his gang of thugs. Their role had become mostly administrative.

We all remember Gerry Ritz "Death by a thousand cuts, or should I say cold cuts" remark during that period.

Well now, as they serve inspectors with layoff notices, they are saying "Don't worry. We "will not make any changes which will not in any way put the health and safety of Canadians at Risk."

I am not sure I feel reassured.

Meanwhile Gerry can't understand why people might be upset at the Prairie Shelterbelt Program is being done away with. First he says there is no longer a need for the program then claims there is great potential for the private sector to take it over.

That Gerry sure can be confusing some times.

Those who follow the CBC have been reading the mixed messages coming from the Harper Government for some time now.

Shortly after the last election Federal  Heritage Minister James Moore gave the CBC and its supporters a reason to relax. He assured us that the Cons weren't going to use their majority  to slash the national public broadcaster. In fact, pledged Moore, the government would "maintain or increase support for the CBC."

That assurance was tempered however by comments by a couple of his colleagues.
The fact is the CBC has been cut by a succession of Governments going back to Brian Mulroney.  It is an old strategy, and it works. If you cut an institution again and again over a long period of time, as it struggles to keep its head above water it flounders bit by bit, until it eventually becomes irrelevant.

Developers do this all the time. They buy up houses in a community one by one. Let them run down. Rent them out to bad tenants then, when by design the neighbourhood becomes an eyesore, they petition city hall for the right  to tear the buildings down and build apartments buildings.

That is what Harper is trying to do to the CBC.

It goes on and on. No time to remind you of the Robo call scandal except to say that Elections Canada investigators on the trail of the "Pierre Poutine" suspect in the robocalls case have apparently been asking questions about the actions of staff at Conservative party headquarters in Ottawa. Some suspicious conduct there which will have to be followed up.

Then there are the jet fighters, Peter Mckay is still defending his actions.

We all remember Rob Anders, the Calgary MP who was moved from a Veterans Affairs Committee after he fell asleep during a hearing, then ranted that a couple of presenters who were atually Con Party members were NDP hacks.

He has a new spot new position on a little-known House of Commons committee to loosen Canada's firearms rules. His ultimate goal is to repeal strict gun control provisions "shoved down our throats" by the Liberal government in the mid-nineties.

Anders said he will use his position on the regulations committee to put the RCMP Canadian Firearms Program — which administers Canada's gun control regime — under the microscope. Those rules mean that gun owners have to lock and safely store their guns when not in use. They also put restrictions on the owners of restricted and prohibited firearms.


Anders is joined on the committee with Yorkton's right wing crazy MP Garry Breitkreuz, who for years led the Conservative charge to scrap the long-gun registry.

Surely that is enough. It all gives me a headache.

I am finding it difficult to continue blogging regularly, not because there isn't much to blog about but perhaps because there is too much. It defeats the purpose if it just makes me more angry.

This week was too much though.

So, Obama, the leaders of the other countries in the Americas, except Cuba, meet to discuss pressing issues. No big surprises here. A vast majority of the leaders with two notable exceptions came to the table declaring that the "War on Drugs" in an abject failure and arguing that the cost is too high. In Mexico alone, 60,000 people have been murdered as a direct result of the cartel's efforts to keep up the supply an insatiable North American Market.

The leaders living south of the American border want to see some form of legalization as the only way to stop drug violence. The leaders north of the boarder want to dig in and protect the status quo. Canada wants to toughen up their war on drugs with mandatory sentences for growing five or more scrawny marijuana plants.

Then came a motion that, Cuba be invited to any future meetings. Nicaragua and Honduras have been boycotting these meetings to  protest Cuba's exclusion and all the other leaders, except for Obama and Harper, want Cuba at the table.

I understand Obama's hesitation in an election year but what is going on with Harper. His move to back Obama on this issue makes Canada look very much like some irrelevant toady nation, snivelling up to the bully.

Harper, perhaps thinking that no one would notice at home, is saying that "Cuba is a communist country with a record of human rights abuses. The world know where Canada stands on these issues."

Canada has had a pretty good relationship with Cuba. Pierre Trudeau visited in 1976. When I visited Cuba shortly after, there were still posters up welcoming he and Maggie. Forward thinking Americans, wanting to help Cubans often did so by moving goods through Canada to the Caribbean nation.

Canadians love Cuba as a vacation destination. It ain't Club Med - thank God - but it is warm, the people are friendly, the accommodations good and the costs are reasonable.

So why this change, so may years after.

Harper would like us to think his decision is a principled one. Based of good foreign policy and humanitarian policy. That all seems to fly in the face of Harper's about face on China, in Canada's long trading and business relationship with Libya - until the revolution and if we wanted we could make a list of African despots Canada sits down withregularly. So what gives?

The truth is, if the USA hadn't been so single minded all these years, Cuba would be a much more democratic nation today. The single largest deterrent to building democracy is not the Castros. It is American foreign policy.

Personally, I think the USA is embarrassed that,  despite decades of trade embargoes, Cuba has one of the best health care systems in the hemisphere, more poor kids get a good education and there isn't a large unemployment level.