Why not Protect Wild Horses. 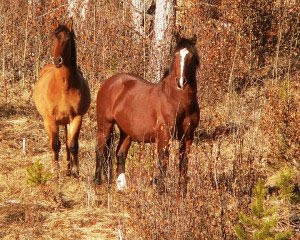 A Saskatchewan Party member of the legislation, Tim McMillan , recently introduced a private members bill in an effort to protect a herd of wild horses in the Bronson Lake area of Northwest Saskatchewan. Evidently there is some evidence that this herd may go back as far as the early 1800's. There is even some speculation they may be linked to horses used by Spanish explorers. DNA samples have been sent to Texas to try and see if that link is possible. Who knew?

With the introduction of the bill, there has been some media interest - limited at best - in the herd which has been reduced from 300 plus to about 125. Harsh winters and wolves play some part in the reduction of the herd but what is disturbing is that local yahoos have been going into the back country on their quads and are shooting the horses for fun. They don't use the meat they just leave it to rot. At times, horses are shot and stacked up as bear bait so these idiots can shoot black bear.

I confess that I don't understand this need to kill.

According to media reports, McMillan has his work cut out for him and has "many hurdles yet to overcome" in getting this bill passed in the legislature. I can't for the life of me understand why. Surly the NDP are not going to stand up and insist that this right to shoot horses be maintained. Who would defend such practices?

So good luck Tim McMillian. If anything your bill doesn't go far enough. Killing any living thing for fun, just doesn't cut it in 2009.
Posted by .Gord Hunter at 08:02 No comments: