The Queen is in Halifax celebrating the 100th anniversary of the Canadian Navy.

They didn't invite me and I can't imagine why. 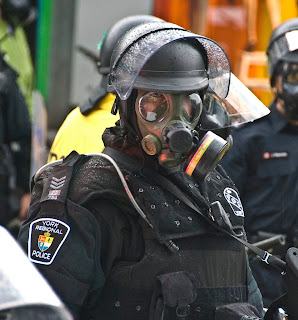 First let me say that the black block got in the way of things and their tactics did nothing more than help to slience legitimate voices of protest. So, instead of voices of dissent we saw images of burning cars.  It gave a reason for the authorities to justify the police to get out of control.

I don't think anyone felt reassured by listening to the Toronto police chief over the weekend. First they didn't use tear gas, then they did. He still won't admit using rubber bullets although a very credible CBC journalists reports that a woman standing very close to him went down like a stone after being hit with one.

Saturday the police stood by and watched black block protesters smash windows and burn police cars, later in the day and on Sunday they charged the crowds and arrested almost 900 poeple, mainstream media photographers and journalists along with people out for a walk beating some of them up. We will see the real tally when we see how many of the "thugs" arrested are actually convicted of anything serious.

So...what went wrong. To start with it was a formula for disaster.
They;
I have been in my share of demonstrations including the G8 in Calgary where the police were just as present. I was on the street working with a cameraman trying to witness the events. I know how these things can easily get out of hand.

Before being too quick to assess blame on the thousands of legitimate protesters don't forget that in Montebello the police were exposed, acting as agent provocteurs, dressed as block block members, preparing to throw stones into the crowd to try to provoke violence. If it hadn't been for the fact that they were challanged by a bunch of middle aged trade unionists with a video camera to record the whole thing we never would have known.

So Toronto, you blew it and you know it. Don't forget to make Harper pay come election time.

And by the way Toronto, dump that police chief will you. He is working against you.
Posted by .Gord Hunter at 14:15 No comments: