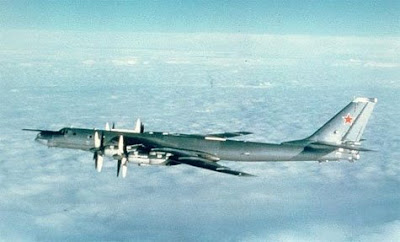 What I found most intriguing was the news report suggesting that young Peter Mackay let the story "leak" out at a news conference. I can't believe for a moment that this was a slip up or that it "leaked" out. Perhaps it was the reporters first day on the job in Ottawa or something but, this didn't "leak" out. MacKay was trying to make Canadians believe that he and the military had thwarted some Russian invasion. What bull. He said, the Russians were "... met with … CF-18 fighter planes and world-class pilots that know their business. The pilots sent a strong signal they should back off and stay out of our airspace."

First there is nothing new about these flights. They have been going for decades. It is like a game, the Russians start to fly towards Canadian airspace, Canadian fighter jet scramble, they intercept, take a few pictures, the pilots wave at each other, the Russians turn and go home.

For one thing, everything seems to indicate that they were never in Canadian territory. For their part, the Russians seem a bit confused/bemused by it all. This kind of saber rattling by MacKay in an effort to increase the government's numbers in the polls is the cheapest kind of politics. I always hoped that our government's reactions to events on the world stage would be just a bit more sophisticated than they have been lately.

The way I see it, the not so very progressive Conservatives thought they needed a little something to spice things up. A little pro military story to follow up on their law and order stuff. Canadians have been pretty ho hum about their performance lately so they are looking for a little something to catch the public's attention. It will take a bit more that MacKay's chest beating to pull this bunch out of the doldrums.
Posted by .Gord Hunter at 11:26 No comments:

Saskatchewan Child Poverty. Everyone to Blame

On December 11 I wrote about Canada's shameful record when it comes to child poverty. Well this month it is in the news again.
Shameful!

In the face of all this the CanWest owned Regina Leader Post's front page is all about boosterism. Their latest campaign is to push as hard as they can to get a new stadium built. The story about the Children's Advocate's report turned up on A7.

The report is shocking. As many as 21 children were placed in one foster home in Saskatoon. The current provincial guideline is four children per home. The highest number the Bernstein could find anywhere else in Canada, was nine. The situation was liken by one psychologist to "a puppy mill". The report also documents numerous cases of physical, sexual, emotional and psychological abuse.

Saskatchewan's Social Services Minister Donna Harpauer calls the revelations in the report on foster homes profoundly disturbing. She said the state of foster care in the province has been steadily worsening for two decades, but has never been addressed. Notwithstanding that, she says don't expect a quick fix. Since taking on the portfolio, Harpauer has gained a solid reputation as someone who points fingers and shifts blame, rather than that of a minister who understands and accepts her own responsibility.

Of course it will take time Donna. There are more important things to take care of like, nuclear power, a new stadium for the Riders and things like essential services. But don't worry, these children don't vote and probably never will.

Before the opposition members gloat too much about this story it should be remembered that the sad situation that exists at Social Services got into the state it is under the New Democrats. In fact former Premier Lorne Calvert was in the portfolio now held by Harpaur for a while. It isn't about politics, it is about fixing the problem.

Why is it that it today's world we need agencies like Child Poverty
Posted by .Gord Hunter at 08:18 No comments:

Will CanWest come Crashing down? Should we Celebrate? 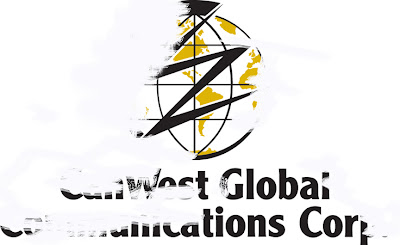 So, people are speculating that CanWest empire just might come crumbling down. Cash poor and over extended if they do come apart at the seams, many industry people will be glad to see them go. Certainly from my perspective, CanWest’s influence on both the television and the newspaper industries has been from the start, negative.

In the early days of their involvement in television they boasted about the amount of Canadian production they did but, in reality it never aired before a vast majority of viewers were tucked away in bed. Their local programming was appallingly bad and they starved their newsrooms for resources. They made their money outbidding the other players for American programming which dominated their prime time. They didn't give a fiddler's fart about the Canadian television production industry.

Izzy Asper was a bully. He had the cash and for the most part he did what he wanted. Challenge him and he threatened to sue. We know the CRTC is mostly a spineless crew but boy, did he intimidate them. With their “Promise of Performances” seldom met, most broadcasters over rehearsed their presentations. Conversely Izzy would just sit there, challenging their authority and bullshitting them about what he planned to do next with his system, he refused to call it a network. And, the CRTC let him get away with it, pure and simple.

On the newspaper side he simply followed the Black model buying up the National Post after Conrad couldn’t make a go of it and making it even worse. CanWest took other dailies across the country, already gutted by Black and cut them even further. Wire copy replaced stories by local reporters and family members wrote national editorials that newspapers across the country were forced to carry. At least Conrad Black was a fairly good writer.

When Izzy died readers were inundated with stories about what a good guy he was. Many people who worked for him would say different.

Given the chance to make things better his family pure and simple dropped the ball. Some would argue they inherited an empire destined to come crashing down.

Should we celebrate if the empire fails? After all, what good is an economic downturn if we can’t at the very least celebrate when the bad guys fail?

If CanWest crumbles, sources will be tapped and buyers will be found but as always, it will be the people in the trenches who will lose out. The already stretched to the limit staff will have to do more with less once again, and the public will have to be happy with an ever diminishing product.

Not much good news in that I am afraid.