Why do we Condone Hockey Fights? 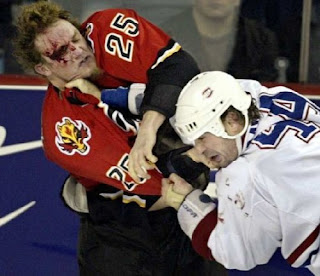 I have a confession to make. I don’t fight. I know that must sound almost un-Canadian to some people raised on hockey violence and bar fights. I suppose it is no wonder. It isn’t that I am never aggressive, never argue or never get angry. Anger comes to me as quickly as it does to anyone, sometime too quickly.
I spent the majority of my working life in a rough and tumble trade union environment, collective bargaining, organizing, walking picket lines, in demos being jostled by cops and dealing with sometimes volatile workplace situations. I spent the first eight years of my working life in the Canadian Navy, two and a half of them in submarines. I have been in waterfront bars in some of the toughest cities in the world. I have seen lots of fights but...I don’t fight.
What brings me to this is the story out of Ontario about 21 year old Don Sanderson who, in the midst of a hockey fight, fell, hit his head and died a bit later in hospital. I wasn’t there, I didn’t see it happen and if there is a Utube video, I haven’t watched it but I am deeply affected by it. What a tragedy for his parents and friends. I have a 21 year old son and I can’t imagine how I would feel if he was taken from us, particularly by such a senseless series of events.
What I think bothers me the most about it is how many people, Don Cherry among them, in a way condone the conduct which brought on his untimely death. Frankly I am sick and tired of hearing that fighting is just part of the game. With all respect to the Don Cherry’s of the world, that is simply bullshit.
It would be so easy to stop fighting on the ice. If I was the NHL commissioner, or better, someone with someone with power in the junior hockey system, I’d shut down fighting in a season. The solution is simple. If a player knows that the league or association he plays with has a no exception, zero tolerance policy, it will stop. We might lose a few thugs the first season but who cares. No one who actually cares about the game will continue to throw punches.
Hockey fighters are bully’s and thugs. I cannot understand why we continue to fete them by splashing their pictures on newspaper sports pages and by running hockey fight highlights in sports bars. Ever wonder why we get bar fights? We say it is ok to fight. In fact we glorify it.
The fact is that people who can’t handle a situation, who don’t have solutions or are too dumb to find them fight. It is 2009, we are not that simple a species. Fighting is stupid and primitive. Condoning it, in the school yard, the hockey rink or on the job helps to make it more acceptable for men to beat their wives and kids or to start fights for fun. Arguing that fighting is ok in sporting situations makes it easier for us as a nation to condone what is happening in Gaza, in Darfur and in Somalia.
I don't care what Don Cherry says. It isn't right and we should stop it.
Posted by .Gord Hunter at 09:12