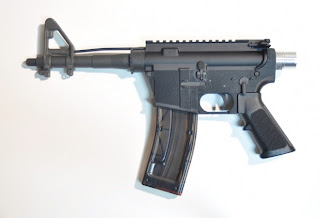 It is hard not to be impressed with how far technology has moved in the last few years. I'm not talking about comparing the iPhone 4 to the iPhone 5 or the fact that manufacturers will almost give away printers just for the ability to sell you the ink.

What is the most amazing is how quickly 3D printers have improved in the last few years. We are not very for from having the ability to print off broken machinery parts, instead of waiting for them to be shipped in from China or where ever else the manufacturer is located. Don't forget, the "just in time" model doesn't work very well when something breaks. Your local distributor most likely doesn't have the part in stock.

So in the not to distant future what you may be able to do, is to go on line, find the part you need from the manufacturer's catalogue and after paying the fee, download the file, then print it out on your 3D printer.

What happens then when people want to get their hands on something that is restricted or perhaps against the law altogether. Just say for example that you want to get your hands on a assault rifle magazine the holds 30 or 40 rounds. Just in case you have a gopher problem.

No problem, just print one off.

It is all a bit pricy now but, what about five years from now? Those who support this sort of thing will make the files available on sites like Pirate Bay and first thing you know, any gun nut with access to a 3D printer will be printing these things out en mass. The file for high-capacity magazines has been downloaded more than 150,000 times since Obama’s gun control executive orders.


A scary thought in any ones books.
Posted by .Gord Hunter at 11:14 No comments: