Speaking of democratic deficit a new Environics poll commissioned by Avaaz shows a decided gap between the policies being pushed during Harper's tightly scripted campaign stops and what Canadians want, need and believe.

The poll shows that
In the face of these figures Stephen Harper, the proverbial bull in a china shop, charges on with his agenda.
Harper majority? Canadians are not that stupid.
Posted by .Gord Hunter at 10:09 1 comment:

To no one's surprise, Brad Wall, the consummate right-wing pitchman has jumped into the election fray after promising everyone to steer clear of the Federal race. Brad, who is about as intellectuality deep and complex as your average AM radio, morning show host, told everyone that he was deeply troubled by Ignatieff's musing about what options were open if Harper didn't change his ways bullying ways. Wall suggested that the Liberal leader was planning to "...overturn of democratic results of the federal election." It is obvious from Wall's comments that he doesn't even begin to understand the Westminster system of parliamentary democracy he works under as Premier.

Not surprisingly, Wall along with his best friend and deep blue Alberta Premier Ed Stelmach, sees nothing whatsoever wrong with Harper assuming power when 63% or 64% of Canadians voted for a party, other that the one Harper leads. It is the king of pretzel logic we should be used to from this lot by now.

Wall can't seem to grasp that his "close relationship" with Stephen Harper only works one way. The more Brad bows and scrapes and demeans himself - the more Harper ignores him.

Some advice Brad. Stay out of the big boy's sandbox.
Posted by .Gord Hunter at 09:38 No comments:

How is your Election Going?

I have to say, in a lot of ways, it has been a pretty weird election so far. I am not one of those who thinks that the election is unnecessary. I think this election call was crucial. We really had to find a way to wrench our country from the grasp of the right wingers. But so far, it isn't working out the way it should.

This antiquated first past the post system we have sets us up for some weird situations. There are a great many ridings in Canada where the incumbent was elected with the majority of voters casting their ballots for someone else. In my riding for example the incumbent MP is Tom Lukiwski. Tom is invisible in the city of the Regina, is known as an obstructionist in Ottawa and has a pretty good shot at winning because of the Tory blue rural voters. He is in a bit of trouble as a result of his refusal to speak out about the failed BHP potash bid and his lack of support for the attempt to secure Federal funding for a much needed new stadium. In case you missed it Tom,  the Roughriders are a big deal here.

He and the other 13 Conservative MPs here in Saskatchewan have earned a reputation of saying nothing unless the issue has been vetted, then scripted by the PMO.

My reading of the situation is that, considering the riding history, if any party can do it, the NDP would have to best shot to knock him off.

Given that, the NDP, in its wisdom, is running a Provincial NDP party worker and country singer in an attempt to unseat Tom. All credit to Brian Sklar for his commitment and I hear he has a pretty good band but, couldn't the New Democrats find someone with just a bit more depth?  All that being said, I expect Sklar's and the Tex Pistols, have in pretty good following out where those crucial country polls are located.

Then there are the Liberals. Monica Lysack is the spoiler. She has good credentials but  hasn't a hope of winning. The role she'll will play will be in splitting the anti Harper vote and Tom will come up the middle.

When it is all said and done the NDP and the Liberals will point fingers and blame each other for the result.

I have lived in the riding for going on 14 years. No Federal candidate or candidates representative has ever come to my door and if there are all candidate's sessions, they are a secret.

I hope you election is going better than mine.
Posted by .Gord Hunter at 11:07 2 comments:

Where is all this Going?

I was reading the polls again. Big mistake. Polls will drive us crazy and I am not sure if anything really meaningful can be learned from them.

The overnight Nanos poll would tell us that the Conservatives are up in the polls but their methodology is a bit wonky. The question asked is not who would you vote for but, "For those parties you would consider voting for federally, could you please rank your top two current local preferences?" I don't know what that really tells us except that outside of Quebec no one is voting Bloc.  On second thought I guess it doesn't even tell us that. In any case that poll, shows the Tories gaining ground.

However, if the question asked is Which of the federal leaders would you best describe as:


Things come out quite differently. Harper has dropped considerably over the last few days. 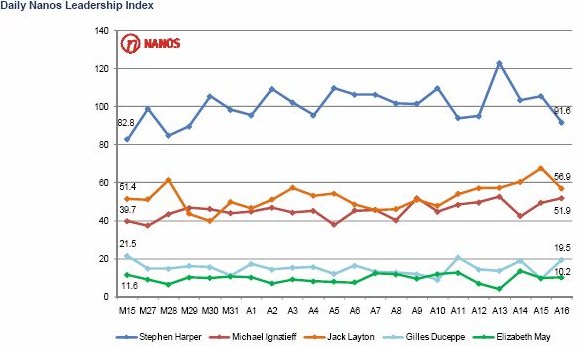 The other thing I found interesting is that when it comes to issues, is that none of the leaders are talking much about is Health Care. That issue is at the head of the pack with The Economy running second.
While  27% of Canadians apparently say the economy is the most important issue 30% of us say they see the economy growing stronger in the next year. So, Canadians care about it but are confidant it is ok.
Harper seems to wants us to focus on his economic record and to worry about what might happen if he isn't re-elected. I can't figure out why. His record  isn't particularly good.
Harper plays an old game. In political science there is probably a name for it. It works like this. Even if it isn't true,  keep saying it is. Say it often and with confidence. Do that often enough, people begin to believe it.
Even the media seem to buy in which, to me at least, is curious considering Harper's economic record lags far behind that of Paul Martin and Brian Mulroney.
The media refer to his economic credentials but in truth, Stephen Harper doesn't have the qualifications to teach economics in a community college. The Canadian economy weathered the economic down turn better than most in the G20 more as a result of banking regulations put in place by Liberal governments that my Conservative economic policy.
So we struggle along through an election campaign that already seems too long arguing about the economy, the tough on crime agenda, attack ads, fighter jets, the ignored veterans and corporate tax cuts.
Did we need this election? Yes we did. Will it accomplish much? I wonder.
If anything this election will highlight to Canadians just how broken our democracy is. What we really need to to replace all the leaders except perhaps Gilles Duceppe. We then need to have a serious talk about a vision for Canada. We need to have a frank discussion about how to fix our broken electoral system. It is time to drag those old tired politicos into the 21st century.
Posted by .Gord Hunter at 09:54 No comments: