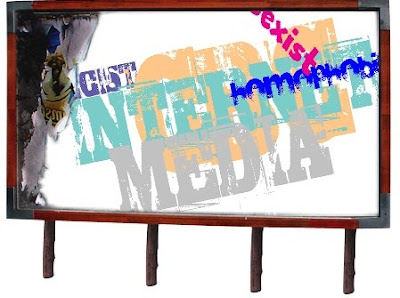 Have you spent any time reading the "comments" sections of internet news sites lately? I have and frankly, I am really wondering what the hell is going on.

The idea is a good one. I see real value in having a forum which allows me to comment on stories that grab my interest and to read what others think. Unfortunately most of the news sites have been taken over by yahoos, with names like Sewerhead, Commiehater and Redwolf. Many of them must spend their days just waiting for another drug story to rant on about, a First Nations story give them an excuse to spread their special brand of hate or any news story about Jack Layton to send them into a full fledged seizure.

It has gotten so bad that a First Nations group from Manitoba has filed a complaint against the CBC saying that they are promoting racism by allowing the comments to be published on their site.

It isn't the CBC alone although they do have their own brand of crazies responding to every story. (The right wingers think the CBC is run by communists and the lefties think the Mother Corporation is in Harper's pocket)) Most news sites struggle with the same problem. As I understand it, part of the issue is that if the media outlets choose to moderate the sites, they could become libel for anything over the line that slips through.

Perhaps this is my own small appeal for some sanity. I really do appreciate a good rant but most of this stuff is put together by people who can't even construct a proper sentence and that must have spell check turned off on their computers. Get a life people. A bit of maturity goes a long way.
Posted by .Gord Hunter at 10:59 No comments:

Harper at it Again

A couple of things caught my eye earlier during my morning sift through the Globe and Mail.

First I noticed that in, what was billed as a non partisan move, Harper has moved Paul Wilson into his inner circle as Policy Chief. Non Partisan? Wilson is billed as an former Reformer who was working in Diane Finley's office. I hardly think that the old Reform Party was a hot bed of deep intellectual thought or that they were non partisan. The words rabid and narrow minded spring to mind.

Either those reporters have been just rewriting the spin coming out of the PMO or they are smoking something better than I have got.

The other story I thought was intriguing is the one about Quebec's plan to build a hydro electric project in what Newfoundland and Labrador claim as their territory. This territorial dispute has been largely ignored by everyone for over 20 years now and the Federal Government has sided with Quebec in agreeing to hear that province's argument that the land is theirs. It is hard to believe that the Federal decision is little more than a chance to poke Danny Williams in the eye all the while sucking up to Quebec for votes. It is what Conservatives think of as shrewd political strategy. It is what I think of as petty and small minded vindictiveness.
Posted by .Gord Hunter at 08:10 No comments: 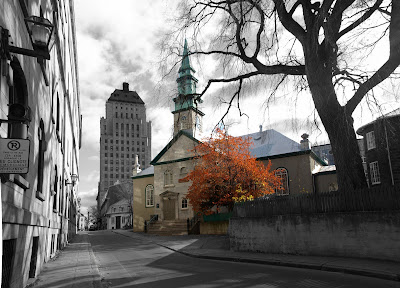 St. Andrews Church in Quebec City was established in 1808. At least this church was. My ancestors on my mothers side came to Quebec as Fraser Highlanders fighting with General Wolfe in 1759. They stayed and eventually helped to start this church.

I took the picture when we were there in the fall.

I know that the effect here is no big deal but, I am home with a bad cold and passing the time playing with Photoshop. I like the contrasting autumn colour of the tree and the green church roof with the black and white background background.
Posted by .Gord Hunter at 17:25 1 comment:

Well, it is settled. We are going to walk Hadrian's wall in June. We have something booked with a Canadian tour group called Natural Outings. It should be fun. We walk the length of the wall from Newcastle to Bowness on Solway a distance of about 85 miles. The group is no more than 10 people and we take a week to do it staying at B&B's and small hotels along the way. They move our packs every day so we don't have to carry them.

We fly into Edinburgh and will spend four nights there before heading to Newcastle. That will give me the chance to follow up Ian Rankin's Edinburgh checking out the spots haunted by Detective Inspector Rebus.

After the walk we intend to spend a few days in the Lake District.
Posted by .Gord Hunter at 11:18 No comments:

Most Canadians will remember that when Olympian Clara Hughes won speed skating gold for Canada in 2006 she announced that the cash bonus that went with it would be going to support the Right to Play program.

Now the International Olympic Committee (IOC) has decided that they will sever ties with Right to Play. It is all about General Motors getting their knickers in a knot about the fact that the car manufacturer Mitsubishi is sponsoring Right to Play. GM is a major sponsor of the 2010 Olympics and thinks that if Right to Play goes ahead, affiliated to the Olympics, it will dilute their advertising hit. Shame on GM!

Many of the Olympians who give time and money to this fine cause are decidedly annoyed. Clara Hughes makes a point of linking articles about this shameful decision in her blog.

Rick Mercer takes the issue in this rant.

I urge everyone to write to the IOC and tell them that they are wrong. While you are at it, boycott GM and let them know why.

It is more difficult to contact the IOC than one might think. The links on some of their pages don`t work but, if in doubt, try this: