What is Next on the Agenda We Wonder?

I noticed that the union and Air Canada reached a deal today. Well, considering that Harper and his bunch showed their hand over the disputes at both Air Canada and Canada Post it is no wonder. Any smart negotiator knows you can probably get a better deal at the table than you can from a legislated settlement.

Why wait to see what the Blue Meanies think is fair?

The Postal Workers are a bit more stubborn so it is anyone's guess what happens there but I would be surprised if they wait to see what Lisa Raitt thinks is a fair compromise..

Who knows what might be next. There seem to be two schools of thought in Canada.


I for one, find it tough to think they won't take advantage of their new position to put their right wing stamp on our country. We will survive though. This isn't the first government with a get tough agenda. We lived through Brian Mulroney and I have spent most of my life fighting cuts to programs by the Liberals.

Never the less, they have a full agenda and as much as the graphic at the top right is a joke, it isn't all that far from reality.

This in no time to be complacent.
Posted by .Gord Hunter at 13:35 2 comments:

Right to Strike Means nothing to the Blue Meanies 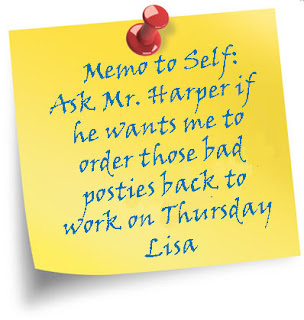 We are starting to get a taste of how this new Blue Meanies "majority" will play out. Not well if this is a harbinger of things to come.

Despite media reports that the strike by agents at Air Canada really isn't having much affect on the travelling public, the Labour Minister today said they will promptly legislate the employees back to work and may table legislation to do that as nearly as Thursday.

That is pretty amazing. They haven't even been out 24 hours yet.

More interesting perhaps is the Postal Workers' dispute. They have been carrying on rotating strikes across the country. Pretty responsible I thought, not wanting to shut down  Canada Post all together. The mail was getting through albeit a bit slower that usual.

Canada Post then decided to go on the attack and locked the workers out to see if they could bring things to a head. The Labour Minister once again jumped into the breach and threatened back to work legislation.

I admit I don't know but, I suspect the conversations between Canada Post and the minister's senior people went something like this.

Canada Post: "Come on. You have to do something. We're losing money with damn rotating strikes. It is all a royal pain in the ass. You can't let those guys push us around.


Labour Canada: "I'm not sure we are prepared to bring in legislation to stop a rotating strike but...Let's see...What could we do?... Well, if no one was at working at all that would be another matter." Wink, wink, nod, nod.

Canada Post locked everyone out this morning. No mail, whatsoever is being delivered from coast to coast to coast. Someone call Lisa Raitt.

If the minister had a lick of sense she would have simply told Canada Post, a Crown Corporation, to quit playing silly bugger, to pull the lock out notice and get people back to work. Some mail must be better that no mail. But no. She didn't see it quite that way.

With a total shut down she figured it was time to teach those Posties a lesson. I can just hear her saying, "Picketing Post Offices? Not on my watch"

Lisa says, the legislation will be ready in the morning. It will be back to work for those scoundrels.

Months of hard bargaining down the drain and just the way this government likes it. Yhe employers will get what they want. The Posties get screwed.

You can depend on this government.
Posted by .Gord Hunter at 21:02 No comments:

Asbestos is Back in the News

Asbestos is back in the news with a United Nations resolution, attempting to ban the substance, coming up next week. One time asbestos was widely used in Canada but, it's use has been outlawed in this country for years after it was recognized that it causes lung cancer. Asbestos has killed millions of people world wide.

Canadians overwhelmingly support the ban, but to our shame, our government is the only developed country trying to block an agreement that will save lives.
Stephen Harper knows that he is isolated, at home and abroad, and he with his new majority his Blue Meanies can get away with blocking the deal quietly. Fat chance.

I blogged about this issue in early 2010 and wrote to my MP, Tom "do nothing" Lukiwski asking for a ban. The response I got was laughable. We need a major public outcry to make sure our government knows that Canadians are watching.

In an attempt to convince Little Stevie of the error of his ways a campaign website has been set up and I urge you to visit and join over 4500 Canadians who have already sent messages to our PM.
Posted by .Gord Hunter at 15:39 2 comments:

A Shift in Values? 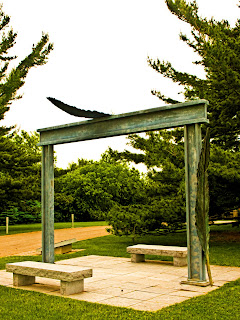 I've been in Ottawa these last few days so my blog posts are a bit behind.

I walked a lot while I was there, re-connecting with a city  I really quite like.

Just along where the the Rideau River runs into the Ottawa we came across a bit of sculpture. The plaque says the  "Monument  honours Canadians' commitment to International Development and Humanitarian Assistance and pays tribute to all Canadians who gave their lives in pursuit of theses values."

I said when I read the inscription, "This is what I think of when I contemplate  our country and this is what I think we stand for as a people. I don't want us to be the new tough guy on the international scene. We are, or at least we were, a country that cares."

We walked on another hundred metres or so to what used to be the Canada and the World Pavilion. A sign outside said that the pavilion's purpose was "..to share Canadians' international contributions with" us. The pavilion  and the exhibit are now permanently closed.

For me, that sign pretty much summed up the values of our current government.

Another thing I noticed was the number of people around the city in uniform. It wasn't so long ago that military personnel were instructed to wear civilian clothes to work. The government didn't want people to be conscious of how many military people actually worked in in the city. When you did see someone they were in dress uniform.

There days all the members of the army walk around the city in full camouflage which makes no sense at all except that this government wants to send a much different image to Canadians who see military personnel in the street. Harper's people see these camo outfits projecting a tough, rough and ready image. It might be practical to wear camo if you were crawling around in the bush trying not to be seen but on a city street?

I know that Defense Minister Peter McKay like to dress up in army gear every chance he gets, kind of like George Bush,  but in truth, the only practical camouflage for most of these people would something that would let them blend into offices and filing cabinets.

I just don't like where we seem to be going.
Posted by .Gord Hunter at 13:10 No comments: