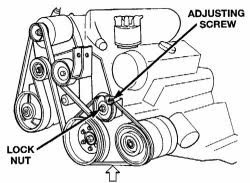 We are heading east to help Morgan and Chris get settled in Lennoxville and Ottawa. I will visit my Mum spend some time with my brother and touch base with some good friends I havn't seen in a while, The van is packed to the gunnels and then some, so we are carrying a bit more weight than I'd like.

We got away in good time and the trip was pretty much uneventful until early afternoon.

Our first hint of trouble was this very odd noise from under the hood while I was passing a truck, up hill, just east of Brandon. We pulled over and had a look under the hood. The serpintyne belt had started to fray a bit along one edge. The loose bits were making a racket.

We dug out the wire cutters and Chris gave the belt a trim. It worked fine for a while and then we had to do it again. After about three trims we headed for Portage La Prairie, about 100 km away and kept out fingers crossed

As we pull in to Portage, Chris saw the Chrysler dealership. Saturday their service department hours are 9:00 until 3:00. We got the car in at 2:38, repairs complete and we checked out at 3:01. That was cutting it close.

So here we are in Kenora. What did we learn along the way.
Who knew.
Posted by .Gord Hunter at 20:27 No comments:

Who were those People? 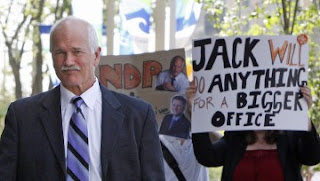 There were stories on the web yesterday and in several newspapers this morning about Jack Layton's meeting with Little Stevie. The Liberals have been meeting with the Conservatives all summer so, big deal. Jack got a meeting set up so he could show that he was pushing the government on his issues too.

What struck me about the stories was the Reuters photos that accompanied them. It showed a couple of earnest young adults behind Layton holding up a couple of signs criticizing Jack for meeting. The signs I saw read "Jack will do anything for a new office" and "NDP + Conservatives". The cut lines read something like, "Protesters greet Jack Layton at the Langevin Block as he goes to Meet Stephen Harper."

The story that wasn't written by any reporter was "Who are those people?"

The left, however annoyed they might be at their party or the effectiveness of the leader, tend to grumble about it with each other and very, very seldom air their discontent in public.

That leaves us with the probability that the "protesters" were simply there to try to embarrass Jack. So who were they? I see two possibilities.

Either they were;
I am betting that the PMO agreed to the meeting with Layton knowing before hand that nothing would be accomplished.
So what to do. They could just let it all unfold as expected or, try to undermine Layton's meeting right from the get go. My guess is that the stunt originated in the Prime Ministers office. Now how cynical is that? We shouldn't be at all surprised, political junkies take courses in this kind of thing.

I think the question should be, why don't the media report it.
Posted by .Gord Hunter at 10:36 No comments:

What about those Infrastructure Dollars? 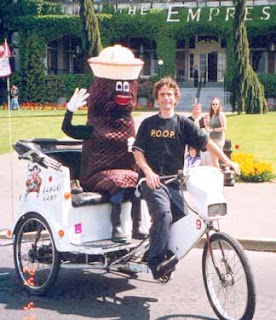 A story in the Globe & Mail caught my attention the other day. It seems that Halifax harbour is starting to stink. Residents were hoping that hurricane Bill will give the water such a good churn that most of the gunk will be washed out to sea. It is no wonder really. With part of the system down for repair, Halifax dumps 82 million litres of untreated sewage into the harbour daily. Just in case you wondered, that works out to 2400 semi-trailer tank trucks a day full of sewage. It is no wonder that locals are finding finless browns and beach whistles (tampon applicators) floating near the beaches and are more than a bit put off by the smell.

Halifax isn't alone of course. Although they tell us changes are in the works the city of Victoria B.C. does pretty much the same with their 160 million litres. Things got so bad that where the A&W has the root bear, Victoria has Mr. Floaty. He even tried to run for mayor in 2005 in his attempts to get things cleaned up.

It isn't just on the ocean, sometime they can't figure out what to do with the stuff inland either. While communities have cut back on dumping untreated sewage into rivers from time to time plant failures show up colossal stupidity. A few years ago scores of people in North Battleford Saskatchewan were infected with a parasite when the treatment plant went down for a while. The drinking water intake for the city had been built down stream from the sewage treatment plant. Go figure.

It will be a while before any Canadian forgets Walkerton.

It is all pretty disgusting. When are we going to figure out that we can't just continue to dump this stuff into rivers or the ocean. It is quite amazing that with all the science and technology around us, we continue to act like some third world power when it comes to our effluent.

Hey, what about Little Stevie's infrastructure dollars. Sewage treatment plants are not as flashy as new stadiums and interchanges but we do need them.
Posted by .Gord Hunter at 11:04 No comments: