In the Main it was a Water Problem 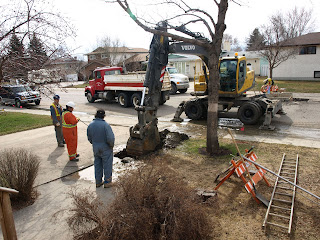 After driving from Vancouver to Regina in a couple of days I was pretty beat when I pulled up outside my house Tuesday afternoon. I was immediately taken by the stream bubbling through my front yard. Now a spring suddenly appearing in your front yard, might be turned into a nifty landscaping feature but I thought I should check out all the possibilities before getting carried away with that idea.

I called the city.

Sure enough the water line had split and although we still had water in the house, something had to be done about that stream.

This morning an army of workers and a convoy of heavy equipment arrived in front of the house and in short time they were digging holes in the road and my yard. The city water crew had moved in and had the problem in hand.

Who knew the problem would go right back to the old issue of contracting out? Instead of having city crews install the water lines, the city sub contracted the work. The contractor cut costs by using plastic lines instead of copper and now one by one they are splitting and have to be replaced. The workers tell me that thousands will have to be replaced within the next few years, and they will. Where is the contractor, who knows. Probably doing it all over again in some new subdivision.

Complain all you like about city workers. They will at least do the job right.

City counselors? They will continue to contract out to the cheapest bidder. You figure it out.
Posted by .Gord Hunter at 12:30 No comments: 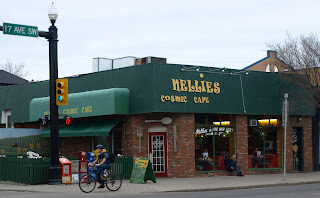 If you are in Calgary and are looking for a basic, old fashioned, diner breakfast, in my experience, you can't beat Nellie's. You won't find some packaged deep fried potatoes passed off as hash browns here. The servings are substantial and the service is casual and friendly. They have the feel of old fashioned diners.

There are five Nellie's restaurants in Calgary, two within a couple of block of each other on 17th Avenue. I can vouch for both of those ones but I haven't tried the others.

A couple of eggs easy over, hash browns, toast and sausage along with some good coffee will take you easily to lunch, and beyond. So next time you are in Calgary, relax, settle in, read the paper and have a few cups of coffee. The staff are friendly and they don't seem to mind when you take your time. It is just a great way to start the day. 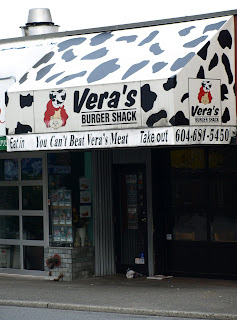 Some would argue that there is nothing more important that a corporate or company slogan. Some work some don't. For example, Get in the habit, Capital Cab it doesn't work for me while who can forget that Wheaties has been the Breakfast of Champions for decades.

Wendy's says, See the spots, feel the hunger (Don't worry, I don't get it either) Burger King stresses that when you order one of their burgers, you can Have it your way. McDonald's wants you to know that they have Billions sold.

All very catchy but I think Vera's Burger Shack on Denman Street in Vancouver's wild west end may be on to something. It is a bit more out there with their slogan You can't beat Vera's meat. Somehow I am not sure Regina is ready for Vera.