Saskatchewan Media Asleep at the Switch

I don't know what it is for sure but, either the Saskatchewan media is inept, their budgets don't allow for any investigative reporting or they just take everything Saskatchewan Premier Brad Wall tells them, at face value.

Wall went to bat to save the Potash Corporation of Saskatchewan's (PCS) corporate ass after BHP Billiton tried a hostile take over late last year. Wall worked hard to convince Saskatchewan citizens that BHP was a foreign takeover of a Saskatchewan corporation despite the fact that the PCS headquarters along with CEO Bill Doyle was in Chicago. The provincial government pulled out all the stops to pressure the Harper government to scotch the deal and in the end Industry Minister,Tony Clement caved to pressure and did just that.

It was during the BHP dust-up that PCS made its famous "Pledge to Saskatchewan ." Doyle said that perhaps they had been remiss, he'd move back to Saskatoon and that a majority of the Board would live in the province, and that they would become better corporate citizens, more involved in the community, blah, blah blah...

A few weeks ago Brad and Bill had a cozy media event where they patted each other on the back, praised each others work and reaffirmed that PCS was a true green Saskatchewan company.

Things however are not quite what they seem. When Doyle was first appointed to be the  corporation's CEO he did move to Saskatoon. He built a large six bedroom house, with seven bathrooms  and a wine cellar and multi-level terraces leading down to the South Saskatchewan River. A few years later he decamped to where the real PCS head office is located, Chicago. Better night life I'm told.

Now he has "moved back" to a 1000 square foot condo in a building attached to the Saskatoon Radission Hotel. PCS pays the taxes on the place and Doyle pays the rest which I guess means the condo fees, from the almost $10 million he get paid each year.

Apparently everyone is happy now. Brad Wall got some much needed political points.  PCS got to keep on with its sweet royalty deal and the Saskatchewan people can go back to sleep.

I don't expect much more. I guess we'll see how the rest of the "pledge" all works over the next few months but I pretty much think, what we see is what we get.

The thing is, it took Toronto's Globe & Mail to tell me that.
Posted by .Gord Hunter at 09:04 No comments:

This all Brings Hypocrisy to a New Level 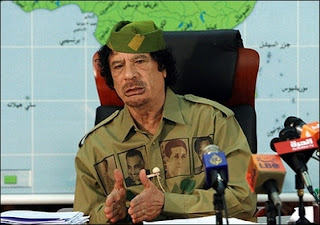 With regimes unraveling day by day in the Middle East, or so it seems, most Western Leaders must really have their knickers in a knot trying to figure out how to react. No country that depends on oil from these countries wants to step up to support the "democracy now" protesters before they figure if the dictator they have supported for years, is going to survive or not. It was hardly two weeks ago that Hillery Clinton called Hosni Mubarach a family friend, a statement she surely regrets.

The West has been working hard to reach out to Omar Khadafi who is now being called by many the Mad Dog of Africa.

Scotland released the Lockerbie bomber, a Libyan who was responsible blowing up Pan Am Flight 103 which was enroute from London Heathrow Airport to New York on 21 December 1988. The 747 was destroyed killing all 243 passengers and 16 crew members not to mention Eleven people in on the ground as large sections of the plane fell in the town and destroyed several houses, bringing total fatalities to 270. It is largely suspected that the culprit was released as a part of some oil deal with Kadafi

Not so long ago a press release from Prime Minister Stephen Harper's office let us all now that Canadian Foreign Affairs Minister Lawrence Cannon intended be on-hand in St. John's, Newfoundland to greet the Libyan leader while he was on a one-day stopover in the province on his way home from a brief, if unsuccessful visit to the United Nations in New York.. As it turned out he had a change of plans and was a no show.

When we open our embassy there not so long ago David Kilgor described Libya as "a beautiful, peaceful country full of potential....Hopefully, the visit of my delegation, will encourage greater efforts to further the development of Canadian-Libyan relations across a broad spectrum of political, commercial and human interests. I am delighted to report that my discussions with Libyan ministers and officials have been successful and productive in addressing issues and increasing understanding between our two countries."
The real concern in the world today seems to be will "Mad Dog" use chemical weapons against his own people. And what will all this do to the price of oil.

I was surprised to learn today that Suncor, Canada’s self described,premier integrated energy company has crews working in Lybia helping the development of energy resources in Libya’s oil fields hoping to double capacity.

It is suggested by analysts that the Libyan leader is stashing billions of dollars in his family's private accounts. Money skimmed off the top of the county's oil revenue.

Why do we all do business with these guys?

Politicians' careers are destroyed because they have affairs, if someone admits having smoked dope in college they will be considered unreliable and having a meal in a restaurant with someone who has a shady past might be grounds to be kicked out of your political party. Meanwhile our governments and our good corporate citizens routinely do business with thieves, torturers  and murders.
It is time we started paying a bit more attention. It all stinks to high heaven.
Posted by .Gord Hunter at 19:02 No comments:

Canada's electoral system makes very little sense. The first past the post method of electing our parliamentary representatives has been tossed out by most democracies in the world and replaced by some form of Proportional Representation.
Canadian politicians and pundits argue that it is all too complicated for Canadians to understand.  I for one, have more faith in Canadians' intelligence than most politicians.
The two large parties in Canada have both taken advantage of the system to form government when most Canadians have actually voted for some other party as their favoured representative. Perhaps that is why they never seem to take the time to explain the options available to us.
A few examples:
Lucky for us, proportional representation isn't that tough to grasp. If you really want to understand how it all works I offer this short video. It is a bit dated but the principles are the same and who better than John Cleese to explain it, as only he can.