How Does She Read this Stuff with a Straight Face? 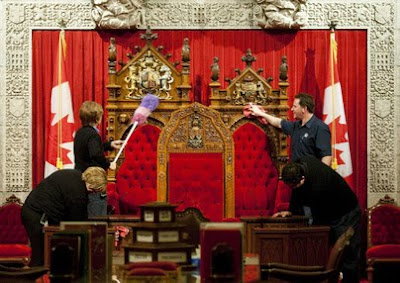 Stephen Harper usually doesn't have much truck with the Governor General presenting the speech from the throne. In fact, most of his government's Throne Speeches have been quite short. One was only seven minutes long. In a break from his tradition, yesterday's speech was described as being about the size of an Ottawa phone book which must have been a bit of an exaggeration but, it did run about an hour.

I listened to some of it yesterday. I can only stand to listen to so much bull in one sitting. I can't say that I was terribly impressed.

It made me wonder how long the bad taste will remain in the Governor General's mouth after having to participate in the charade. One of the toughest things about being the GG must be having to read that specious tome.

Some would say she deserves it after rubberstamping his prorogue request. Submitted by telephone no less.

The newspapers have analyzed the hell out of it so I won't bore you by going on and on about the speech but there were a few things worth mentioning.

First there was the observation by some commentators that Harper did less recalibration than he did regurgitation of policy and ideas. In typical fashion he rolled out some items in the speech that he has already rolled out two or three times before. The line was so good Iggy picked it up and used it in the Liberal release.

Then there was revelation made by several media outlets and by the Liberals that the thrust and title were stolen from a speech made by John Howard in Australia. It isn't the first time that Harper has been accused of swiping material from the Aussie PM. In 2003 he was accused of plagiarizing parts of a speech on Iraq. One of Harper's speechwriters resigned over it.

The Globe & Mail reports that Canada now ranks 25th on the World Economic Forum's Gender Gap Index. That is all a bit too distressing considering that in 2007 we were 18th and in 2006 we ranked 14th. Several groups have been quite vocal in accusing the Harper government pushing back gender equality but in this Throne Speech he shows us how he intends to make it right. The government is going to rewrite Oh Canada to make it gender neutral. The truly troubling thing is that many Canadians will buy into what Harper characterizes as progress.

Harper, never one to show any respect to people represented by trade unions announced yesterday that there will be a wage freeze on government workers' salaries. A legislated wage freeze flies in the face of the concept of free collective bargaining. It is one thing to say we will be going to the bargaining table with our employees' representatives and we will be holding the line on wage increases in these tough economic times. It is quite another to implement a government wide wage freeze. It shows a deep disrespect for the tradition of collective bargaining and laws of the land.

They will try to lower the bar when it comes to pensions in this country. Instead of moving to protect pensions this government will move to gut the pensions held by Federal government workers justifying it by saying that they are out of line and that Federal workers have to share in the pain. Anything to hold on to the votes of their grass roots members. It is shameless.

Now that the glow has come of our involvement in Afghanistan, even in the eyes of Harper's supporters the Government has cut funding military. Curiously, or perhaps just a smart strategic decision they didn't mention that in the Throne Speech at all.

Today we will hear about how Harper will pull us all out of this economic deficit we find ourselves in. Don't expect any mention of the fact that before any of the global economic down turn happened Canada was already in a structural deficit caused by Harper's rollback of the GST.

Fresh from all the free and fawning publicity given to Harper by CTV at the Olympics I am sure he thinks Canadians are ready to buy into his hocus pocus. I am not so sure. If these Olympics were the defining moment for Canadians that the media claims they were then perhaps we will stand up and say "Sorry Harper. Your definition of this country is quite different from mine." We can only hope.

Let's send this guy packing. We can't do it quickly enough for my liking.
Posted by .Gord Hunter at 07:58 No comments: