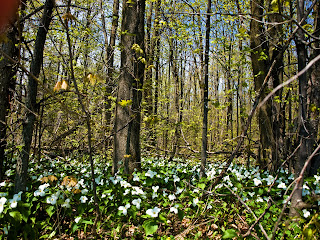 One of the things that surprises visitors to Eastern Canadian forests in early May are the trilliums.  About this time of year these flowers carpet forest floors in Ontario and Quebec and into New England. They are mostly white but in Quebec we used to find areas where most of the flowers were a deep purple with only a few white flowers and a very few pink ones. It is quite an impressive show

To be honest I had forgotten about them but as we drove by Hudson and into Ontario on our way to Ottawa the forest floor was covered in those white flowers.

I had Chris pull over so I could take a few pictures. 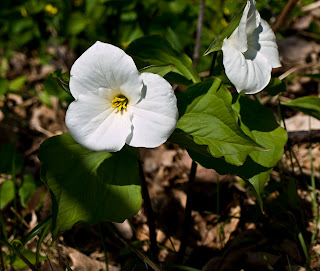 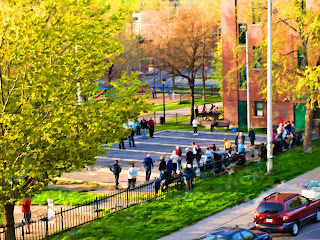 We were sitting on my brother's front deck, having a glass of wine when the cars started arriving. First one then a few more, then they filled up most of the available parking spots on the usually quiet street. In no time there were 50 or so men and women, most in their 60's filling the area around the boule courts in the park across the street.

Sandy said this was the second time this week that had happened. They milled around for 15 or 20 minutes, seeking out friends, shaking hands, renewing aquaintences and then someone with a clipboard kind of took charge and before you know it they had teamed up and six games were underway.  An urban boules league. Who knew?

Boules is one of those games played with steel balls. Kind of like lawn bowling but, played on a dirt court and without the dorky clothes and the Pimms. You can almost guarantee that on any given evening in the south of France, a group of, mostly older men, will be playing boule. Its like Bocce or Pétanque but I don't remember it being popular in Quebec.

It was chilly but we sat out, watched for quite a while and marveled at the sense of community that obviously exists. Not quite all what we expected in Pointe St Charles.
Posted by .Gord Hunter at 17:14 No comments:

I was just back to Montreal to visit my mother and to share driving duties as my son Christopher drove home for the summer.

When I was around 12 my mother enrolled in Education at MacDonald College and we moved to Ste Anne de Bellevue on the west end of the Island of Montreal. She still lives there.

The village was full of history and I was particularly taken by the Simon Fraser House, an old stone building built in 1778 located across from the Ste Anne locks.

I had a fascination with the Frasers. On my Mother’s side our ancestors fought with Wolfe as Fraser Highlanders. They were given land grants and stayed in Quebec.

I was disappointed to learn that the house was never owned by any distant relation of mine, nor did it belong to the explorer Simon Fraser.

This Simon Fraser was a relative new comer to Canada. He was businessman. One of the principles in the North West Company.

Aside from being a lovely old stone historical property, local scholars claim that Thomas Moore wrote the Canadian Boat Song while he was staying at the house as Fraser’s guest.

Not many years before Moore’s visit, Ste Anne was pretty much the edge of the “civilized world”

A chapel had been erected on the site in 1703 and the trappers and traders heading upstream on the Ottawa River would stop, give alms and pray for safe passage.

Many of them didn’t make it back.

Local historians claim that it was during his visit; Moore put the words to that piece.

We'll sing at St. Ann's our parting hymn.
Row, brothers, row, the stream runs fast,
The Rapids are near and the daylight's past.

In 1804 when the Boat Song was written, the village was a fur trading post. The rapids at Ste Anne meant the voyageurs had to portage.

The North West Company and the Hudson Bay Company both figured they would get a better deal if they did business there saving the voyageurs work of unloading the re-loading their cargo in Ste Anne. Something they would have to do again when the got to Lachine.

So, they bought furs from voyageurs heading south at the lowest price.

When those same voyageurs headed back into the wilderness to their trap lines, they would save two portages and a day’s paddling if they bought their supplies in Ste Anne de Bellevue. Of course the merchants by saving the voyageurs an extra day’s work could sell supplies to at inflated prices.

The merchants profited both ways.

Some things never change
Posted by .Gord Hunter at 10:22 No comments: 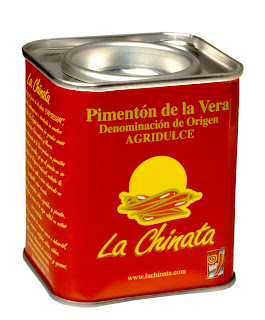 Is it any wonder that Spanish cooks love to use paprika? I am becoming addicted to its smoky flavour.

For supper this evening I picked up a small whole chicken, about $8.00 or $9.00 worth and cut out the backbone and laid it open and flat. I then rubbed about 4 tablespoons of hot smoked paprika into the chicken, added a bit of olive oil and put it into a plastic bag for 4 or 5 hours.

I soaked some large mesquite wood chips in water for a couple of house and when I was ready to go I lit the gas barbecue. When it was hot I threw on the wood chips. Then laid the chicken skin side up on one side of the grill, turned off the heat below it and let it cook for an hour or so.

It was a windy day so it was hard to keep the heat up so, after an hour or so I turned the oven up to 450 degrees and put the chicken in a roasting pan with about 3/4 of an inch of water in the bottom and popped it in.

When the chicken was done, I took the pan juices, added a bit of chicken stock and thickened it into a gravy.

I served the chicken with Caribbean style rice and peas, yellow beans an of course, the gravy.

It had a pungent smoky, slightly hot flavour and the mesquite really complemented the smokiness of the paprika. I don't like to boast but, it was delicious.

If you don't like things hot, use a sweet paprika instead. Be sure to buy the Spanish stuff too. My favorite come in a distinctive red can, La Chinata. They have hot, sweet and bitter.

If all you have is Hungarian paprika, either go out and get some of the good stuff or wait until you have it on hand. It is simply not an adequate substitution.
Posted by .Gord Hunter at 21:25 No comments: