Scratch one up for Wiley Coyote


I was encouraged to see that Saskatchewan Agricultural Minister, Bob Bjornerud has canceled the coyote bounty program, even he did it a bit begrudgingly. When announcing the cancellation Bjornerud had to admit that the Saskatchewan Party had received a great deal of criticism about their plan.

Well, chalk one up for the bloggers, the activists, the naturalists and the wild life experts.

The program, which stipulated that in order to collect the bounty the hunters had to cut off, and submit all for paws, before being paid. That struck me as a more than a bit barbaric and it also raised the speculation that those out shooting coyotes for beer money probably can't tell their left from their right so the government had to make it all four paws..

The announcement also make me think that books like little Red Riding Hood and Peter and the Wolf kept the Agriculture Minister up nights when he was younger. Obviously those books left some permanent scars. Bjornerud is afraid of coyotes. Suggesting that canceling the program might put children at risk he said, “I have grandchildren” and it would be tragic if someone’s children or grandchildren were mauled or killed by coyotes.

Of course other than grandchildren, the coyotes eat quite a few gophers and other pests. The way I see it the more coyotes eat, the fewer gophers and the less poison the farmers put into the soil.

The next time you see Bob. Give him a hug and tell him everything will be all right.

They Just Don't Get It. 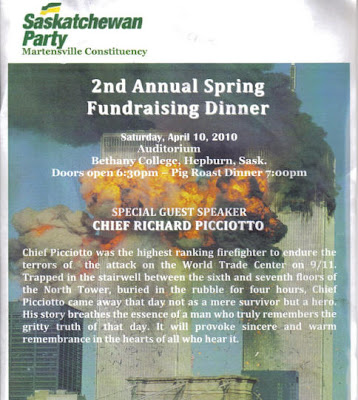 The Saskatchewan Party just can't figure out why people are offended at their use of a photo of an aircraft being flown into the Twin Towers in New York.

Saskatchewan’s Environment Minister is using an image of the 9/11 attacks was used to advertise a Saskatchewan Party fundraiser in her riding.

The poster promotes the “2nd Annual Spring Fundraising Dinner” in Nancy Heppner’s Martensville riding and promises a pig roast as well as a speech from Chief Richard Picciotto, the highest-ranking firefighter to be pulled from the rubble of New York’s World Trade Center.

What the Chief's insights have to do with Saskatchewan is a mystery to us all. Hepburn Saskatchewan is, after all, some distance from the events of September 11th.

A photo that forms the poster’s backdrop shows the World Trade Centre exploding into flames. The New York Times photograph was taken right after the hijackers flew the iarcraft into the building’s upper floors.

Shame on Heppner and shame on the Saskatchewan party for trying to capitalize on this tragedy to raise politcal funds in this cheap manner.
Posted by .Gord Hunter at 20:33 1 comment:

Now That Would be a Interesting Twist 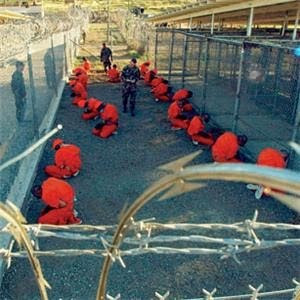 We may see an interesting turn of events in the Omar Khadr matter in the coming months. Little Stevie Harper may have to soften his position that Khadr must be tried in the old USofA.

Khadr, who is perhaps the world's most famous child soldier, was sent to Guantanamo just a few weeks after his 16th birthday in 2002. I wrote about facts of the case as I understand them in an earlier blog. The story is a twisted tale of lies upon lies by US officials.

It seems that the new administration don't want the publicity and criticism that bringing a child soldier to trial would heap upon them. It limits their ability to be critical of other nations who use child soldiers. Trying Khadr legitimizes the practice.

So US officials are trying to figure out a way to get Canada to ask that Khadr be repatriated. The Americans don't want to simply send him home. They would get too much flack from Republican knuckle draggers and I can just imagine how Fox news would react.

The trick now is to get Harper, stubborn to a fault, to change his position on Khadr which would be a little embarrassing for him.
Posted by .Gord Hunter at 07:36 No comments: