It is going to be an interesting debate

Elizabeth May won huge in the debate draw. In the English language debate, Stephen Harper is on the extreme end with May next to him. That means May will be free to turn at any moment and directly confront the Prime Minister. She is also between Stephane Dion (in the centre position) and Harper, centring the frame in the only fight that really matters. Chances are very high that May will be in "the clip," if there is one.

Jack Layton has a similar - albeit less dramatic - win in the French language debate placement. Between Harper and Dion, with Gilles Duceppe to Dion's left is a good spot. He gets a chance to attack Harper directly, showing he is the real opposition leader, while Dion is off in the corner.

Dion has decent placement, but he would rather be confronting Harper than Duceppe in French. In English, he is going to have to fight Layton off while yelling over May to attack Harper (and in mediocre English.

Read the full story at the Globe & Mail
Posted by .Gord Hunter at 17:42 No comments:

The union representing Canada's food scientists and inspectors issued its own call on Friday for Stephen Harper to fire federal Agriculture Minister Gerry Ritz, saying he has "repeatedly disappointed" those who work for him during the listeriosis crisis.

The head of the Professional Institute of the Public Service of Canada, which represents 1,800 food inspection and health protection workers, described Ritz's jokes about the crisis linked to 17 deaths across the country as "the last straw."

"Crisis requires real leadership, and Mr. Ritz is clearly not fit to lead," the union's president, Michèle Demers, said in a release Friday.

The controversy continued to dominate the Oct. 14 federal election campaign for a second day on Friday as opposition leaders stepped up their attacks on the Conservatives.

Harper, speaking Friday at a campaign stop in Quebec, again dismissed calls to fire Ritz, saying the minister "clearly did not intend to make any such comments publicly and has thoroughly apologized."

He also said his government has committed to a full inquiry into the outbreak to ensure similar events do not happen again.

But federal NDP Leader Jack Layton countered that Canadians are facing a "food crisis" while the Conservatives have failed to act.

Read the full story at CBC News
Posted by .Gord Hunter at 17:42 No comments:

I picked up these stats in the comments section of the CBC site. I have no idea if they are accurate but they are interesting if they are.

Change in Productivity While in Office

The Ritz Cracker is still making news. The reactions are interesting.

Some of the pundits are saying "stay on" and others are saying "this might cost Harper a majority." We can only keep our fingers crossed on that front.

I liked the Leader Post's Murray Mandryk's piece today. Murray remembered a Ritz quote from 2003. In responding to a memo about George Bush written by an NDP staffer old Gerry said ?These guys have to realize that every time you pee into the wind, you are only getting yourself wet.? Truer words were never spoken.

I can't find what the final tally was but on the CBC site yesterday about 70% of respondents said Gerry Ritz should resign for his cold cuts remark.

About the same time of day on the CTV site, with almost the same question the majority of people voting in the on line poll said he should stay on.

Regina City Councillor, Louis Browne, in a letter to the editor in the LP today asks voters to challenge candidates on the issue of funding for infrastructure. It is a very good point, our cities are struggling to keep up with crumbling and outdated infrastructure. Massive amounts of money are need by municipalities. The question I think is ?Where is Pat Fiacco on this issue during the campaign?? There has been no press conference on the issue and no attempt that I can see to make it an election issue.

Pat did have his picture in the paper today pretending to wipe some graffiti off a phone booth. Our Pat is never one to miss a photo op. Standing up to higher levels of government, now that is another matter.

I also note that Phil Fontaine is appalled that we are spending $22 billion in Afghanistan while Harper scrapped the Kelowna Accord which would have put a fraction of that sum into improving the lives of First Nations Peoples.

Phil is encouraging First nations People to get their issues on the table and into the minds of the leaders.

Thursday the Harper team had to apologize for of an aide to Transport Minister Lawrence Cannon who told an Aboriginal protestor in Quebec that they could meet with Cannon -- provided they were sober. It makes you wonder how many other Conservative knuckle draggers will be outed before this campaign is over.

The NDP candidate for West Vancouver - Sunshine Coast had to step down, after The Globe and Mail questioned him about his Vancouver Seed Bank. The company sells marijuana, poppy and hemp seeds. I thought the video of him trying to light about 15 joints at the same time shown on the CBC was pretty good but his driving while stoned video probably put the icing on the cake.

Meanwhile our largest trading partner's economy is crumbling and Harper says "Don't worry. Be happy. Vote Conservative and everything will be alright."

No one is talking about what this economic meltdown will do to pension plans in this country.

The travesty we are into in Afghanistan continues. The CBC reports that Canadian soldiers fired on a civilian truck, killing another Afghan civilian, after the vehicle came too close to their convoy The military says they tried to warn the truck. "Neither the warning signals nor the warning shot were heeded," military spokesman Lt. Al Blondin said in a statement Friday. "Two additional shots were required to finally stop the truck. Our soldiers are trained to take all appropriate steps to minimize civilian casualties," he said. "However, they must take action to protect themselves when they believe they are being threatened.

An army spokesperson went on to say "Either the signals perhaps were not seen or maybe this was an attempt to attack the Canadians," I am not sure what they were going to attack with, the truck was carrying fruit.

Who is the cracker from North Battleford ? 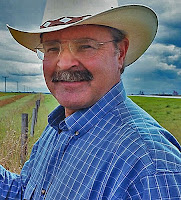 Saskatchewan's own Gerry Ritz is in the hotseat over a few comments made on a conference call dealing with the listeriosis crisis he quipped "This is like a death by a thousand cuts. Or should I say cold cuts," then And when he was told about a new death from listeriosis on PEI, Gerry joked: "Please tell me it's Wayne Easter." Easter is a Liberal MP and a strong critic.

Good old boy Ritz has a habit speaking out before his handlers can stuff something in his mouth. This spring in an interview with the Saskatoon Star Phoenix he referred to Canadian Wheat Board supporters as "the tinfoil hat and decoder ring crowd."

He is also about as honest as you can expect any Conservative MP from Saskatchewan to be. Before the budget in 2007 he joined the chorus of Saskatchewan MPs promising to keep their election promise on equalization. When Harper didn't deliver on the promise the promptly forgot the promise althgether.
Posted by .Gord Hunter at 10:24 No comments:

Who knew there were rules for shooting kids.

When this story first went up on the CTV news site the headline read "Canadians followed rules in shooting of Afghan kids" I e-mailed them and the changed the headline.
Who knew there were rules for shooting kids.
Things just get stranger and stranger in Harper's "new" Canada. We sound more and more like the Americans every day.
Let's get the hell out of this war while we have some dignity still intact

I don't know how long this video will be here. Utube had pulled it be 9:30 A.M. but this SNL Palin/Clinton skit is priceless

Polling numbers as of today

The latest CP Harris/Decima poll suggests that Harper is ahead by 14 points.
With urban voters the Conservatives are on a downward tread and the Liberals are gaining.
As for the leaders, voters feel most the positive about Layton with Harper close behind.
It is interesting reading. This election isn't over yet.

Get poll here
Posted by .Gord Hunter at 14:41 No comments:

What about gas prices? 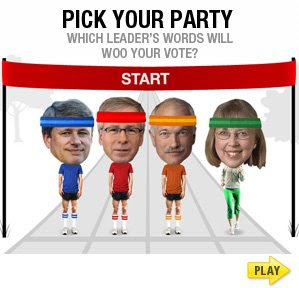 I admit to being a bit confused by Saskatchewan voters. When I think about it I guess I am confused by Canadians generally who seem to be backing Harper in this election.
Harper says he is going to reduce the excise tax on diesel fuel by two cents and the farmers and the truckers send out a collective cheer although with the volatility of fuel prices, after a week or so they will never notice. What a good guy he is. Gas goes up by 12 cents the same day that a barrel of oil dipped below $100 a barrel and those same people still support a Prime Minister who refuses to do anything about that cost to consumers.
This increase is blamed on a hurricane in Texas when all our gas in Regina comes from Western Canada and is processed right here in Regina.
I don't know I guess I am just confused.
To see what the party leaders are saying try this link.

Try the CTV election site's election game above and to the left or to recap the election news stories so far try this one
Posted by .Gord Hunter at 12:12 No comments: