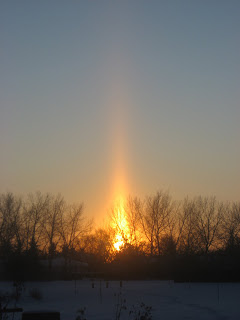 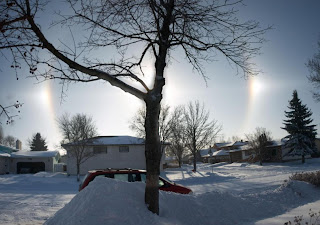 It was cold today and from late morning on there were sun dogs in the sky. A sun dog is technically a perihelion, a bright circular spot on a solar halo. It is an atmospheric optical phenomenon primarily associated with the reflection or refraction of sunlight by small ice crystals making up cirrus or cirrostratus clouds. We only see them when it is really cold. The first picture is early afternoon then late in the day this sun dog produced a sun pillar as the sun was setting. Shelley took a few pictures. This is one of them.

What I need is a Snowblower 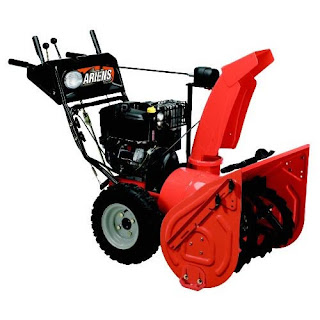 As you may have gathered in earlier blogs, I really do like the snow. Lots of it. Even the shoveling is alright, as long as you take your time but, I always thought was, I need a snow blower.
Snow blowers are like big toys for retired guys. Leave the Ski Doos and ATVs for younger guys, what we old retired guys need is a bright, big noisy, red snow blower. What could be better that moving through the drifts surrounded by a huge cloud of fine blown snow.
Around my neighbourhood you can tell where the retired guys live. The lanes, the sidewalks and parking areas are clear of snow for about 3 houses either side of where these guys live. They love a big snowfall.
That could be me.
Posted by .Gord Hunter at 12:45 No comments:

Moving Slowly into the New Year 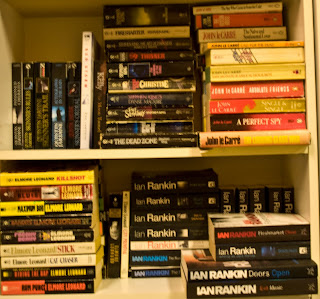 We are not jumping into 2009, vigorously announcing our New Year's resolution for all to hear, setting up goals we are bound to stop short of. One can be too aggressive in approaching a New Year. Marching in, all pumped up eager to face what ever obstacles it throws our way. That approach seldom turns out well.
We are more kind of, easing into the New Year, alphabetizing our bookshelves and culling our stock, shoveling snow, thinking about taking down the tree and trying to sort out our options. You know slowly making decisions like, "Should we walk Hadrian's Wall in June?" or should I try to figure out how to learn Spanish in Spain. Asking questions like, "Will the Camino be too busy in 2010, a Holy Year, or should we wait until 2011?"
You can rush things you know. So we wandered out, into a lovely snowy evening and had supper at The Creek in Cathedral Bistro. It was lovely and unhurried. Most patrons, deterred by the snow stayed home and opened a can of beans. We had a lovely, very tasty supper and a good bottle of wine.
Posted by .Gord Hunter at 11:00 No comments:

USA Should Give Guantanamo Back to Cuba 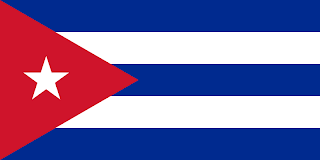 President elect Obama has said he'll close the prison at Guantanamo Bay in Cuba. That is a good first step but, if Obama really wanted to step out in front of past American leaders he shouldn't stop there.
The Americans illegally occupy the Cuban territory they use as a base at Guantanamo Bay. What an insult to the Cuban people that the Americans steadfastly claim it is their right to stay there. Any American government that even begins to practice what they preach should simply withdraw from the occupied territory, and give it back to Cuba.
Posted by .Gord Hunter at 10:23 No comments:

I thought I'd start the year right with a breakfast recipe I had never tried before. A Spanish Potato Tortilla.

I was inspired by references to this dish made by several people who had walked the Camino de Santiago, an old pilgrimage route in Spain. I have been reading a number of books about it, preparing for when I can get my own life cleared up enough to walk the 780 km myself.

It made a great breakfast. I urge you to give it a try. The recipe is at Gord's Kitchen. Just follow the link.
Posted by .Gord Hunter at 12:00 No comments:

Well, 2008 has been quite a year. It was in a personal sense a life changing year. I retired after almost 30 years of bargaining collective agreement, dealing with other peoples’ grievances and trying to take care of those hundreds of other tasks that come with working with a trade union. It was time.

Retirement has been an adjustment but good. My long range plan is to walk the Camino de Santiago de Compestella from Saint Jean Pied de Port in France to Santiago in Spain. It is a 780 km medieval pligramage route which takes about 35 days or so, at lease for old guys like me. That is most likely in 2010.

All in all 2008 wasn't a great year. The economy collapsed in the last few months. I can never figure how guys like me were saying thing in bargaining like, "I don't want to speculate too far ahead because the American economy looks like it is on the edge of a melt down." and the economists didn't see it coming. If you figure that out give me a call.

The Government in Ottawa turned into a bit of a sham in ’08. I think most Canadians always believed that minority governments were good for the country. Minorities prevented bully boy governments from ramming through ideologically unsound legislation. With a minority, governments had to tread a bit softer and seek more of a consensus. Canadians are comfortable with compromise and consensus building, at least that what I always thought.

Unfortunately it didn't work like that.Our Prime Minister turned Parliament into a kind of kindergarten sand box. It was Stephen’s sand box too, and don’t anyone forget. Little Stevie kicked sand in everyone eyes, wouldn’t share the toys, even with his friends and when some of the other kids got mad, Stevie said he’d take his toys home and let the teacher resolve the matter.

Then Stevie put on his best new sweater and smile and told everyone “Oh no, you all misunderstand. It was their fault. I am a nice little boy.”

Three Hundred Million of our dollars later Stevie was back doing it all over again.

There was a brief period where Canadian politics got really interesting for a change and we even considered a coalition government but as luck would have it the Governor General chickened out and prorogued the House.

What surprised me most throughout this whole period was the apparent lack of understanding on behalf of most Canadians about how our parliamentary system works. Most, dumbed down by the constant viewing of Fox News and CNN actually thought they had elected Stephen Harper as Prime Minister. Most Canadians seemed to be completely unaware that the coalition route was one taken by several other governments around the world who use the same system as we do. Not to mention several others. Sometimes I think a kind of means test would be appropriate before allowing people to vote. It you don’t understand our system of government why should you be able to participate in it? Back to class Canada.

I could go on and on about the year, perhaps rant about Canada’s misguided effort in Afghanistan that is killing our young soldiers in a futile struggle to bring democracy to a country whose people may not want it but perhaps I’d best leave that to the Globe & Mail, Maclean’s Magazine and The Economist to try and sort that out.

The year is ending with yet another conflict as Israel batters the Gaza Strip trying to eradicate Hamas. True the Hamas has been lobbing rockets, rather ineffectively into Israel but, the Israeli reaction, as usual far exceeds what is necessary. They always seem to take the old middle eastern “tooth for a tooth” thing a bit too far. With them it is kind of a tooth for a “Hey Bud, you are going to be wearing dentures when I get done”.

The issues are too complicated to sort out and the lobbyist will make sure that no one gives Israel much of a hard time about its actions. No sign of peace for a while yet.

So...have a Happy New Year and let us all continue to remind our politicians both nationally and globally that if we would focus on things like world hunger, child poverty, health care, homelessness and providing clean drinking water the rest would mostly just fall into place. It shouldn’t sound too flakey to say lets just stop bombing the crap out of each other and follow John Lennon. Give Peace a chance.