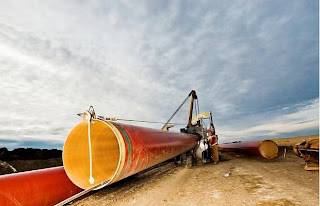 I have been on the CIA website the last couple of days. No, it’s not what you think. The CIA, nosey buggers that they are, have an amazing amount of information about countries around the world, including Canada. They have information about Canada, our own government isn’t all that open with.

I went onto the site because I got thinking about oil. All this talk about the Keystone pipeline and the newer Northern Gateway proposal, which would export oil to Asian markets through Kitimat. Our Prime Minister says we need these markets. The growth of our economy depends on it. We have to sell our oil.

Harper wants Keystone big time. He and the oil companies have been talking about how the pipeline is win-win for the USA and Canada. This pipeline will create jobs in Texas he says. Why do these guys keep putting roadblocks in our way?

I got thinking about pipelines and about imports and exports and thanks to the CIA I have a better idea of the lay of the land.

So, how about this idea Stephen Harper? If, instead of concentrating on building a new pipeline to Texas and creating a raft of new jobs there, why not forget about any expansion of the market, build the pipeline around the Great Lakes to Eastern Canada. Create the jobs in Canada and significantly reduce our oil imports or eliminate them altogether.

Once we start shipping our own oil to Eastern Canada the existing level of export to the USA can be sent south via the existing pipeline network.

Just saying Stevie, it is time to think outside the box.
Posted by .Gord Hunter at 10:32 No comments: