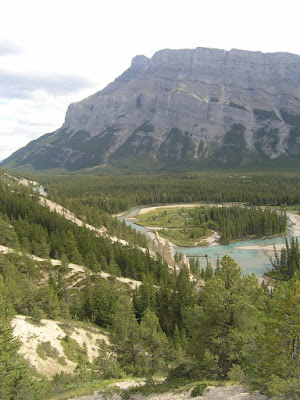 The Hoodoos, Mount Rundle and the Bow River 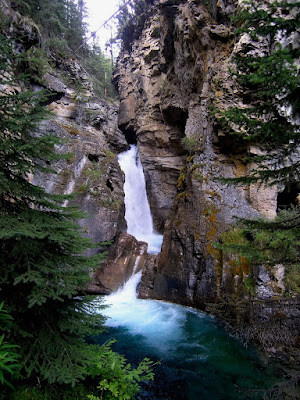 The last few days Shelley and I have been in . We drove to last Thursday and stayed at the Hyatt Regency in Downtown Calgary. It was very nice. We walked down to for Dinner.

The next day we went to Nellie’s Cosmic Diner on for breakfast. It was a great spot, very funky with very large servings and great service. It obviously had a regular cliental. What I thought really made it stand out was that a couple of seniors who dropped in for coffee were told, “Oh don’t worry. It is on the house.”

We drove to mid morning and stayed at the campground. Curiously, for a Friday night it was quite empty. They also were out of firewood of all things. We had to buy it in town for $7.00 a bag. I guess it is all about funding the National Parks. Thank you Stephen Harper.

’s main street is under construction so parking in town was tough and the result was that we mostly steered clear.

Saturday we walked up ’s Canyon the drove on to for lunch. After a bit of a break we walked down to the Hoodoo trail and walked along ia and back to the campsite. We then headed up to the hot Pool for a soak. As always it was crowded but quite warm and it felt good on our aching joints.

That afternoon there was a bit of a situation when a couple of teen aged kids, a boy and a girl, camping down the site from us got into a fight. Eventually the campground people turned up but by that time it had settled down. They said they would ask the RCMP to come by but they never really did. I have this theory that if two or three of us started yelling “Stephen Harper is trying to Americanize out public services.” They would have been there in a flash with pepper spray but… perhaps this is turning into a rant.

That evening we cooked lamb chops, new potatoes and corn then spend a quiet evening around the fire.

The rain started as we were getting ready to bed down for the night. We cleared up and put most things in the van so when in the morning it was raining, we just packed up and went into town for a little B&B - for breakfast.

At first we thought we’d drive to and spend the night but when we got there it was pouring. We had lunch and thought why not just drive thing we might stay in , We got there it was sunny and dry. If we stayed we only be driving through the same rain storm we’d suffered through that morning the next day so we drove home and got back about 8:30.